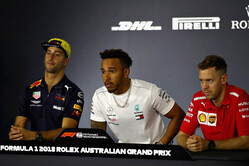 It's fair to say that for the most part fan reaction to Formulas One's new theme tune (not that there was an old one) has not been positive.

Speaking at today's official press conference, Lewis Hamilton admitted that he too was not exactly impressed.

"It reminded me of Gladiators," he said with a grin, and he wasn't referring to the 2000 epic starring Russel Crowe but rather the TV series that started on ITV the same year.

"Anyone remember Gladiators?" he asked of the assembled media and fellow drivers (Sebastian Vettel and Daniel Ricciardo) who all looked equally blank-faced.

"I used to watch it on Saturday night," he added, and as Ricciardo revealed the show was also seen in Australia, Hamilton asked; "are we the new gladiators?"

Asked his opinion of how the sport is changing under its new ownership, he said: "I think there's been a lot of good progress over the last year in terms of how we engage with the fans, the openness, but I think it's still part of a long process of learning where to go. I don't think anyone in this room knows exactly what the key is to moving forward and succeeding.

"It's a very difficult question to answer," he admitted, "but they're doing the best they can and we're trying to support them the best way we can."

"I agree," added Ricciardo. "There's been some good initiatives, especially within the paddock, like at the European races.

"There's generally a lot of guests, fans and VIPS in the paddock, but they're a bit secluded," he continued, "and they've tried to create like a bar, a bit of a common area with some music going which creates more of an atmosphere.

"The on-track stuff, for us, the drivers, that doesn't change," he said, "but at least for the fans it's a good deal."

"There certainly more things to do around the track," added Vettel. "But I'm a traditionalist, I like to hold on to certain things, so probably there's a lot of things that I'm not a specialist in and I need to understand, so I'm a bit confused why the races are later and no more grid girls... but having said that, there are not many changes. I think we need to wait."