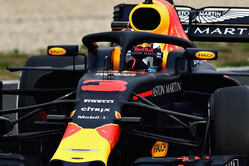 Come Saturday afternoon, those questions that weren't answered over the course of pre-season testing should be a lot closer to being so, though in reality it will be another couple of races before the true 2018 pecking order emerges.

Despite Lewis Hamilton's protestations, the general consensus is that Mercedes leads the way, with Ferrari and Red Bull closing in. That said, opinion varies as to whether it is the Austrian or Italian outfit that has the edge.

Red Bull team owner Dietrich Mateschitz believes that 0.5 is the magic number, a 0.5s difference to Mercedes being enough to put his drivers, Daniel Ricciardo and Max Verstappen, in the hunt, and not only for podiums but victories and possibly even the title.

"We do not know exactly what Mercedes did so far and how big their advantage will be," admits Mateschitz, according to Motorsport.com, "but if we are 0.5 seconds behind, we can match them with our chassis and drivers. If we are one second behind, the gap will be too big to fight for wins. Overall I guess Ferrari and Red Bull got closer to Mercedes."

His thoughts are echoed by Ricciardo who believes all three teams are possibly within 0.5s of one another.

"I don't know where we stand with Ferrari," he admits. "I think we are close. I couldn't tell you if we are a tenth quicker or they are. But Mercedes definitely kept a bit under wraps at testing so I don't want to say we are out of it before it begins, but I think on real pace the Mercedes is still ahead of the Ferrari and Red Bull. I don't know if we are just behind them or just behind Ferrari."

Looking ahead to the weekend, he said: "We are coming to Melbourne a lot more prepared than we have been in previous years, and we have to use that to our advantage. If both cars can get strong points finishes this weekend, and by that I mean the podium, I think that will send out a strong statement to Mercedes and Ferrari."