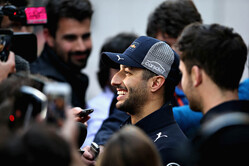 Having not only topped the timesheets in terms of pace, Wednesday also saw Daniel Ricciardo lead the way in terms of mileage.

No wonder then that Niki Lauda suggested that Red Bull could be more of a threat to Mercedes than Ferrari, which has yet to show its hand.

"We don't know about Ferrari yet," he admitted, "but going by Wednesday they are a little behind."

Indeed, though he has yet to secure a berth for 2019, Ricciardo believes punters could do a lot worse than have a flutter on him taking the 2018 title.

"I'm not personally a betting man but a lot of my mates are," he told reporters, "so if they're listening throw a cheeky $75,000 on it.

"I feel where our car was good last year we've made that even better, so our strengths have become stronger," added the Australian, who is currently 10-1 to win the title.

"I still think we need to find a bit more to realistically match Mercedes," he admitted, "but I don't think we're far behind. I think we are better than we were twelve months ago, let's say that much."