Red Bull gets a technical director 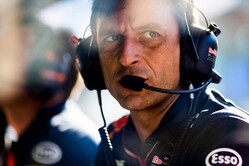 Ahead of the season opener, Red Bull has revealed that former chief engineer, performance, Pierre Wache has been promoted to the role of technical director.

Frenchman Wache, first entered F1 in 2001 with Michelin, working for the tyre manufacturer's R&D unit he was promoted in 2005 to the role of group leader of adherence and simulation.

In 2013 he moved to Red Bull where he was chief engineer, performance engineering and now the Frenchman is promoted to the newly created role of technical director.

Though he is involved in numerous projects, design guru Adrian Newey remains a significant part of the Red Bull F1 team, the Briton attending last week's test at Barcelona.

Wache obtained his PhD in fluid mechanics at the Institut National Poltytechnique de la Lorraine and it is clearly thought his experience in tyres and mechanics will be the perfect compliment to Newey's aerodynamics genius.

"I understand what this position represents, and the risk that comes with it, Wache told L'Equipe. "I won't say it scares me, but I know the results that are asked with it. And I would like to show that I'm capable of achieving them.

"I won't change everything, but I will necessarily work differently. Adrian worked more on the aerodynamic side of things, and I'm more focused on putting the power down on the ground."