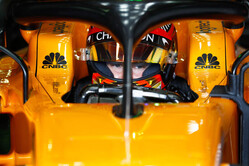 Fernando Alonso: "After a positive start to the season I'm already really excited to head to Bahrain and get back in the car. Australia gave us a positive feeling and I hope we can continue that momentum as we head into these back-to-back races.

"I know the team are working hard back at the factory to push through the upgrades that are in the pipeline, as these, along with the development work we're doing on the chassis and with the power unit, are what will be key to unlocking further performance from our car.

"We mustn't get complacent - these two races in Bahrain and Shanghai are tough on the cars and it's important that we maintain good reliability if we are to maximise our potential. The competition is very strong and we need to keep pushing forward for more points."

Stoffel Vandoorne: "I'm very happy to be heading to Bahrain on the back of a positive weekend for us in Australia. There's a good feeling in the team and we're all working hard to keep that going. We know there's a lot to do and every race brings a new set of challenges.

"Bahrain is a great venue - it's where I started my F1 career when I filled in for Fernando as reserve driver in 2016, and it's an important race for us thanks to our shareholders. The weather is good and the later-than-usual programme for the weekend sets it apart from a lot of other tracks we visit.

"Racing from day to night always feels special and makes this grand prix so unique - it means it's very different from Australia in terms of set-up so I'm keen to maximise track time to work on preparation with the engineers. Last year I had a lot of bad luck there reliability-wise so I'm hoping we can have better fortunes there this time around."

Eric Boullier, Racing Director: "Bahrain is an exciting event for the whole team and a special venue for McLaren. It's our second home due to the team's ownership and we always receive a fantastic welcome from our Bahraini hosts. The facilities are world-class and it's a very enjoyable venue at which to host a grand prix.

"The back-to-back races of Bahrain and China pose very different challenges, and, given that most of our personnel don't travel back to the UK between them, both logistics and car development are two tricky issues that everyone needs to get on top of.

"Speaking of car development, we're working hard to bring updates to the next two grands prix, which we hope will help our boys continue to put up a good fight. As we saw in Melbourne, our competition is tough. We can't take anything for granted and we know that despite a stronger performance than we've seen in recent months, we also benefitted from circumstances around us. Our principal targets are further up the grid ahead of us, so we know there's work to do and our focus is on the development race as well as the race on track.

"The result at Albert Park was a boost that we all needed, but now we must move on, look firmly ahead and keep pushing forward."

Toughest corner Turn 10, a downhill left-hander taken in second gear (85km/h/53mph). The cars are simultaneously turning left and braking, which makes it easy to lock the unloaded inside front wheel. The drivers need to drive in a progressive and controlled fashion because the second DRS zone follows and a good exit is vital.

Unique difficulty Temperatures. In 2014 the time of the race was switched from day to night, from 14:00hrs to 18:00hrs. The race starts seven minutes after sunset, meaning the track and ambient temperatures drop as the race progresses. That alters the balance of the cars and affects tyrewear.

Biggest headache The Bahrain International Circuit is the only track on the calendar that's located in a desert. It's windy and sand from the surrounding wilderness gets blown onto the track surface, which affects grip levels and forces the teams to attach filters onto the brake and engine inlets.

Brakes There are eight significant braking zones, the toughest of which are into Turns One and 14. It's also the first hot race of the year and the combination of high ambient temperatures and heavier cars (734kg) means brakes will need to be monitored closely during the race.

Power The cars use 1.8kg of fuel per lap, which is high. Without a Safety Car period, it will be difficult for the cars to make the end of the race without some degree of fuel saving. Fuel consumption is negatively affected by the large number of acceleration zones from low speed.

Aero To maximise end-of-straight speeds, the cars run in a medium downforce configuration. The aero balance is slightly different to elsewhere on the calendar because the cars are set-up to understeer in an effort to protect the rear tyres.