Renault duo looks ahead to Bahrain 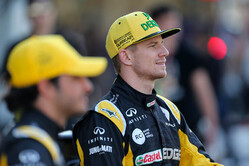 A solid seventh place in Melbourne for Nico Hulkenberg opens up his points-scoring account for 2018. Now the German is eyeing up another strong weekend in the Bahrain desert.

How do you reflect on the season-opener?
Nico Hulkenberg: It was a straightforward race and successful for us. It was a strong weekend and I was pleased by our good race pace. I felt good out there and it's a solid result. Overtaking was very difficult as the cars are aero sensitive and the speeds are so high. Seventh was probably a fair result for us; we would have been higher barring the unfortunately timed virtual safety car. We have to keep working and make sure we beat the teams around us.

We've sent out a positive message from Enstone and Viry, but we need to reduce the gap to the front and that's the challenge.

What do you like about the Bahrain Grand Prix?
NH: The Bahrain International Circuit is a great facility in the middle of the desert. The track itself is quite technical with the natural elements adding a few further challenges, most notably the wind. I really enjoy Bahrain as the heat is guaranteed and the atmosphere is always good to experience.

What kind of approach do you have to take for a night race in the desert?
NH: You take a smooth and gentle approach to the track in Bahrain, while, of course, being as fast as possible. We joke about it being in the middle of the desert, but sand is a genuine element we have to consider in our preparation. If it's windy it gets blown on to the track, so it can vary a lot from one session to another. You're always adapting to the grip levels as well as the wind direction, which you need to suss out to get that perfect lap. My qualifying lap last season was as close to perfect as possible, even on par with the 2010 Brazil one. Hopefully we can repeat that this season and put ourselves in a good place ahead of next Sunday's race.

What other characteristics do you bear in mind in the build-up to the race?
NH: The Middle East is always hot, and that used to be a major factor when preparing for this race, but it's not so prevalent these days as we race at night and it's far cooler at that time. Having said that, it makes Free Practice 2 crucial as it's the session that's most representative of race conditions, so we'll be putting a lot of emphasis on that.

How do you tackle a lap of the Bahrain International Circuit?
NH: There's a long straight with hard braking into turn one where you need to lose about 240kph and it's easy to overshoot that corner if you get it wrong. Traction on the exit is limited so you're fighting the rear end. T5-6 is a very fast combination and very satisfying if you nail it. T8 is a tight and slow hairpin and another place where it's easy to out-brake yourself with front-locking, especially if you get off-line. T9-10 is a long left-hander where you're braking deep into it. Trail-braking is always difficult because of the propensity for front-locking as the variability of wind direction is trying to catch you off guard too.

Carlos Sainz sealed his second points finish in his new colours in Australia, but the season-opener leaves him thirsty for more in the Middle East.

How do you feel after the first race of the season?
Carlos Sainz: Having both cars in the points is a very positive start for the team and we can be proud of the weekend. From my side, I felt more confident with the car as the sessions went by and I'm confident there are still many setups to explore. Scoring points at the first Grand Prix of the year is always important and the pace was there, so I can´t wait to jump into the car in Bahrain.

What are the main characteristics of the Bahrain International Circuit?
CS: It can be tough on the braking system, and some braking points change slightly throughout the weekend due to the timings of the sessions. We take references from Free Practice 2, which is very important as it's the only session representative of the race conditions. It's always cool racing at night and under the lights, which makes this race one of the more unique of the calendar.

How challenging is a lap?
CS: In general, it's quite a standard lap with some flowing corners and long straights, which should bring overtaking opportunities. Turns 9-10 are the trickiest on the circuit. In fact, it might be one of the most challenging sequences of the season, as you have to brake and turn at the same time making it easy to lock-up. Turn 12 is an interesting one, because one lap you can go flat there if the wind is on your side, but then you try the same thing the next lap and it's impossible because of a change in wind direction. Turn 1 is a good overtaking spot on the brakes.

Given the schedule of the event, do you get time to explore Bahrain?
CS: The adapted schedule to fit in with the evening race start frees up some time to spend mornings relaxing, having a swim or doing some sports, which is nice. There is also a go karting track next to the Formula 1 circuit, which is one of the coolest karting tracks I've ever driven. I also try to play golf before the race weekend starts. Bahrain has a very cool golf course which can be played at night! A bit like racing under the lights which is not very common!