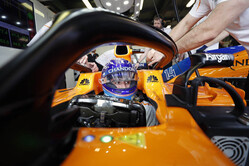 When Fernando Alonso warned that Melbourne would most likely be his team's weakest performance of the year and the team subsequently finished fifth and ninth, many were left wondering just how much better the Woking outfit might get over the coming months.

Granted, the double retirement for Haas played into Alonso's hands as did the VSC which saw the Spaniard benefit in much the same way as Sebastian Vettel.

Heading into the second race of the season, Alonso, who had previously said McLaren is targeting the big three, played down hopes of an imminent Woking revival, insisting that the next two months are crucial for the British team.

"There is still a lot to improve to catch the top three teams," he said. "It's quite a reasonable gap to close but it is up to us now.

"The next two months are crucial for us," he admitted. "If it is not a world championship fight, it will hopefully be some podium positions. It is probably the first time in the last three years it is up to us, the car has the potential.

"We had some ups and downs in testing and then in Australia it was the same thing and the qualifying was not smooth enough to show the potential," he added. "But it was a good race, with help from the safety car, but we take this fifth place and move on. It is up to the team to deliver the performance in the next four, five, six races."

Asked if he really felt it is realistic to be talking about fighting for podiums when the MCL33 is so far off the pace of the 'big three', he said: "Yes. We were two places from the podium in Australia. Anything can happen. If you are close to that position, sooner or later that opportunity will come."