Has Ricciardo killed off hope of overtaking rule change? 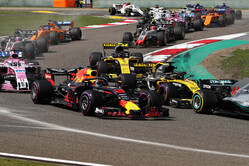 While his exploits had us on the edge of our seats on Sunday, Daniel Ricciardo's sensational drive in Shanghai might have killed off hopes of a change to the regulations for 2019 intended to improve the chances of overtaking.

For as long as anyone can remember, fans and drivers have complained that the sport's reliance on aerodynamic grip over mechanical is harming it.

While the new regulations for 2017 were aimed at making cars look more exciting, overtaking actually fell by 50% compared to the previous year.

Though Ross Brawn's technical team is investigating the issue with the intention of introducing new regulations for 2021 that will make overtaking easier, the season opener in Melbourne - where there were just 5 passes - put overtaking back in the headlines.

Some argue that overtaking isn't vital in order to enjoy the sport, however it is the chance to overtake, the hunting down of the quarry that excites, and when cars are unable to get within two seconds of one another without losing stability, and are therefore forced to hold back, the sport loses some of the magic that has so thrilled us over the years when we think of some of the truly great passes.

The sport has until April 30 to decide whether the aero rules should be changed for 2019 and at a meeting in Bahrain six teams voted again the idea. Prior to April 30 a simple majority vote will suffice, after that time the agreement has to be unanimous, which is essentially F1's version of Mission Impossible.

Other than the fact that regulation changes would mean increased costs - this coming on the back of the raft of new regs in 2017 - the teams will argue that the overtaking-fest in China, not forgetting the numerous passes in Bahrain, show that all is well and that change isn't needed.

The issue is likely to be very near the top of the agenda as the Strategy Group meets today, but with Sunday's thriller still very much on everyone's mind, it is likely to be argued that change isn't needed and that the reaction post-Melbourne was knee-jerk.

"I think the question first of all is what is the strategy behind it?" said Eric Boullier, according to Motorsport.com. "Is it just for overtaking, and is it a knee-jerk reaction after Australia? In Australia there was a lack of overtaking, but actually Bahrain was one of the best races for the last decade. If it's a reaction to Australia, that's maybe a bit too fast and in a hurry."

"There's some proposals going to the teams in the next few days for some things we could potentially do for 2019," said Ross Brawn in the wake of the Bahrain meeting. "If you look at the front wings we have now, they are massively complex, and the flow regime around the wing is incredibly complex, which makes it very sensitive to the car in front.

"So we simplify the front wings, then arguably you could say that you're going to go back in the right direction. Everything we have done in the last few years has gone in the wrong direction," he added, and of course, the man behind the double-diffuser would know all about that.

Among the ideas that have been put forward is unlimited use of DRS rather than restricting its use to two or three designated zones as is currently the case, along with simplification of the front wing, including the banning of the increasingly complicated cascades in addition to the rear wing flap being increased in order to give the wing more depth.

"My question is, should we address this and take a decision in less than two months, and change radically the F1 aero platform or aero regs with the risk that we maybe have to change it again in 2020, because it's not doing what they wanted or expected to achieve? And then change again in 2021?" said Boullier.

"If we change the regulations three years in a row, obviously this is very costly, and I don't think that this is where F1 needs to be when we are talking about sustainability, cost-saving. Why not standardisation or prescription on some parts of the car?

"I think we should investigate this more to try to build the future of F1 and leave the aero like it is so far until we have a better idea of what we want to achieve in 2021."