Teams should be beating a path to Ricciardo's door 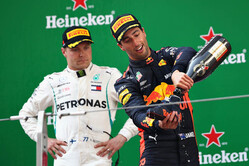 Having nominated Daniel Ricciardo as my 'driver of the year' in 2016, rest assured that, had the Pitpass podcasts continued, he would have been right up there again in 2017.

But for a string of engine-related failure in the final stages of the season he would have been a strong fourth in the standings, instead, another failure in the season finale saw him pipped at the post by Kimi Raikkonen.

In many ways he is like the class clown, that cheeky kid at the back of the class forever ready with a witty quip, the life and soul of the playground.

However, rather than expecting to bluff his way through, perhaps buy the answers from the class nerd or even resign himself to a life asking 'do you want large fries with that?', come exam time 'little Danny' is right near the top of the class.

You see, though he was forever cracking jokes, teasing teacher and happy to play the clown, at night he was burning the midnight oil, determined to be up there with the best of them... but popular at the same time.

Unlike some, who would have told photographers "you've got ten seconds" in the wake of yesterday's victory, Daniel was there grinning and gurning for the cameras, giving the media it's soundbites, aware that, like him, they were doing a job.

Ricciardo is a PR dream, tall (for an F1 driver), good looking, young, an infectious grin and a quick wit... and he drives Formula One cars for a living.

Not only that, he wins in them.

He gave Sebastian Vettel the fright of his life in 2013, and despite the best efforts of some sections of the media, is more than capable of keeping Max Verstappen in his place.

For a few fleeting seconds on the podium yesterday, the emotion began to show. The guy who had been left devastated by a first lap retirement in Bahrain had overcome all the odds to take victory in China just a week later... and how.

Having claimed earlier in the week that Valtteri Bottas should have nailed Sebastian Vettel in Bahrain, insisting that had he been the man pursuing the German it would have been 'job done', Ricciardo got his chance to put his braking foot where his mouth is and he didn't fail. Then again, this time around, neither did Bottas.

As the debate over overtaking continues, with some still insisting that it isn't that important, you can bet that in schools, factories and offices around the world today, fans will be saying 'did you see that?', referring to one of the Aussie's countless moves.

Out of contract at season end, with uncertainty over Red Bull's engine supply from 2019, not to mention the Dutch elephant in the room, surely Daniel has to look elsewhere.

With the added bonus of his Italian genes, he would be a good signing for Ferrari, but would Vettel want to try his luck again?

Then there's Mercedes, and while Lewis Hamilton would be more willing to accept the challenge than Vettel, there remains a question mark over the team's future in the sport... as is the case at Ferrari.

Renault might be an outside chance, but has the Australian had just a little too much heartache courtesy of the French manufacturer? Then again, unlike Red Bull, let's not forget that the wins were with Renault also.

Ignoring yesterday's performance alone, Ricciardo should be at the top of the shopping list for all teams where drivers contracts are coming to an end, teams should be beating a path to his door.

Yesterday, was not a one-off, a flash in the pan, it showed what Ricciardo can do when the odds are fully stacked against him. Imagine what he might do in a team built around him.

Christian Horner has said that the efforts of the Red Bull crew in replacing the engine on Saturday in time for Q1 was down to "team work".

Fact is however, the like his popularity with the media and fans, Daniel Ricciardo brings out the best in those around him, and that is why I have no doubt that in addition to "team work" the 'little Danny' factor played a significant part in Saturday's heroics.