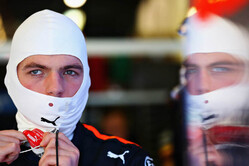 Just seven days after the clash with Lewis Hamilton that led to his retirement and caused the Briton to describe him as a "dickhead", Mad Max Verstappen was at it again, this time colliding with world championship leader Sebastian Vettel.

In a bid to pass the German, rather than taking his time knowing that on fresher rubber it was only a matter of 'when' rather 'if' the struggling Ferrari would yield, the Dutch youngster attempted to emulate the move made by his Red Bull teammate, Daniel Ricciardo, earlier.

However, rather than nailing Vettel with a pass that had the crowd standing, the youngster clumsily clattered into the German, damaging the Ferrari and earning himself a 10s time penalty and 2 penalty points in the process.

Though quick to accept responsibility for the incident and apologise to Vettel, Verstappen now has 5 penalty points in total, and with 12 meaning a race ban it is not inconceivable that the youngster might be consigned to the F1 'sin bin' before too long.

The 12 point penalty point limit covers a period on 12 months, and with Verstappen having picked up the first of his current batch in July last year - when he collided with his Red Bull teammate in Hungary - the current counter isn't re-set until July 29, by which time he will have contested nine further races, and, at his current rate, been involved in a number of further high-profile incidents as his frustration builds.

The FIA's race director, Charlie Whiting, however, like many, a keen fan of Verstappen's obvious talent, is hoping that the China penalty will bring him to his senses.

"There probably is a little bit of criticism but that's what the penalty points are for," he said. "They are there to make an habitual offender take notice. He's got five points now, so he's going to be more careful I would say."