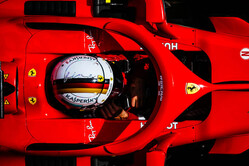 Any hope that Ferrari team boss Maurizio Arrivabene might finally give an official response to FOM's plans for the future of the sport, as revealed to the teams in Bahrain last week, were dashed when the Italian made it clear that it is not his position, but that of company president, Sergio Marchionne, to respond.

"I have to point out that it's not difficult to make a comment," he added. "It's simply not my job. It's the responsibility of my chairman."

The proposals relate to a whole raft of changes post-2020, and other than a budget cap of $150m, the sport's owners are looking to scrap most of the bonuses though Ferrari, which would lose its rules veto, would still pick up a historic bonus thought be half what it currently receives. Also, there is the little matter of the engine rules, which have already had the Italian team talking of quitting the sport for a breakaway series.

"They give us a deadline for the end of May, I think," said Arrivabene, referring to the engine rules for 2021. "I hope that this deadline is going to be respected. It's a bit early somehow but it's far if you're looking at the situation from another point of view, a technical point of view.

"Concerning the engine, we, Mercedes, Renault and Honda sent a letter a month ago explaining in detail our position. Now, it's quite clear."

Asked how Ferrari might react were it to lose its rule veto, the Italian smiled and replied: "We'll let you know as soon as we go deeper into the conversations. You can see a smile on our face or not."

Asked about the possibility of staggering agreement the various facets of the proposals; engine first, then chassis and finally money, he said: "All the elements are important because they are somehow linked together so soon we will find an agreement if any, related to the various topics that are into the proposals and then we can go."