Time running out for Red Bull on engine decision 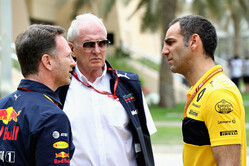 Though it was strongly speculated that Renault had grown tired of Red Bull and, in the face of agreeing a deal with McLaren, wanted to give the Austrian team its marching orders, it seems the French manufacturer is still willing to supply its engines in 2019 to the team with which it won successive titles between 2010 and 2013.

Engine manufacturers have until the beginning of June by which time they must inform the FIA which teams they will be supplying in 2019 and as it stands Red Bull has yet to decide whether to stick with Renault or try its luck with Honda.

Though the Toro Rosso-Honda experiment appears to be working well, Pierre Gasly claiming a fine fourth in Bahrain, is it enough to convince the Austrian team to jump ship?

Then again, with Daniel Riccardo suffering an electrics issue on Sunday which leaves him on the cusp of a grid penalty should the team opt to change his energy store, can Red Bull really afford to continue with a relationship that over the last couple of years has gone from bad to worse.

The very public spat between Toro Rosso and Renault in Brazil last year, when the Faenza team, following a string of failures, essentially accused the French manufacturer of favouring its own team (as if) was a clear sign of just how fractious the relationship has become and some of the thinking going on behind the scenes.

As a result, Red Bull has a clear dilemma and only a couple of months in which to make a decision.

"Before we made the decision to work with Honda we believed it could be a successful package," Helmut Marko told Motorsport.com, referring to the move which saw Toro Rosso switch to the Japanese engine manufacturer, "once they showed us what they were planning to do.

"When the time is right, we'll make our decision," he added. "There's a bigger picture which we have to look at. It's going in the right direction, and you journalists should know that we are brave."

"We've got a great front row seat to follow progress through the first half of the season," added Christian Horner. "That's very much our game plan."

Whatever the decision for 2019, in the meantime there is the little matter of this season, the Austrian team having suffered a double retirement in Bahrain which leaves it trailing McLaren in the standings and only five points clear of Renault.

"The problem of Ricciardo is it is not the first time it's happened," Marko told Motorsport.com, referring to the Australian's issue on Sunday which followed a similar failure in pre-season testing.

"What can you do when a technical issue just stops you completely?" he continued. "We were unlucky with Max, he got such a heavy hit. It broke the wheel, and also the diff was damaged in the impact. But first we have to sort out our qualifying, but we need a fast and reliable engine."