Hamilton twists the knife... to the Max 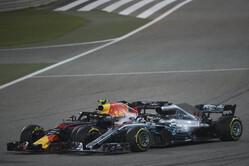 Days after referring to Max Verstappen as a "dickhead", Lewis Hamilton claims that the youngster is letting his team down.

The Briton, has already claimed that the youngster's move on him at the start of the second lap in Bahrain, which ultimately led to the Red Bull driver's retirement, "lacked respect". While watching a replay of the incident in the ante room before heading out on to the podium, Hamilton gestured to the screen and said "he's just a dickhead".

Now the Briton has gone one further, saying that Verstappen's inexperience is costing his team valuable points.

"They have a car which should be getting good results," he said, "but through inexperience, or not mature decisions, they are not.

"I hope he is learning through these situations," added the Briton. "I went through that when I was younger so I know how it is. It is easy to get ahead of yourself and forget to respect the other guys that you are racing against."

Of course, one of the reasons Verstappen found himself battling Hamilton for ninth so early in the race was that both had started out of position, the Briton having been hit with a grid penalty for a change of gearbox, while the Dutchman crashed out in Q1 subsequently blaming the incident on a power surge.

No doubt Hamilton's various comments will put Verstappen in the perfect frame of mind for this weekend's Chinese Grand Prix.