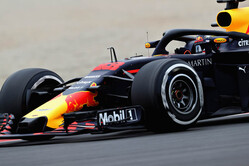 Max Verstappen has revealed that a sudden 150hp power surge caused him to crash out of Q1.

The Red Bull driver was fourth and looking certain to make the cut to Q2 when his car clipped the kerb at T2 causing the rear of the car to step out, from there on the youngster was a passenger as his car skidded across the track into the barriers on the other side. Though his day's work was over his time was good enough to see him make it through to Q2 meaning he will start 15, just a couple of rows behind Lewis Hamilton.

"I was very surprised at what happened, so I wanted to try and understand the cause before commenting on it," said Verstappen. "What we can see in the data is a sudden power increase, just like an on/off switch. It looks like roughly 150 Horse Power was suddenly switched on during the corner which of course is not easy to anticipate, this caught me out and meant I lost the rear and spun.

"The damage to the car was just the front left corner so we don't have any major concerns for tomorrow," he confirmed.

"I was disappointed to crash not just because it ruined qualifying but also as the car is looking very quick here so has made the job tomorrow hard.

"At least at this track you can overtake," he added. "My race pace looks good so if I can have a clean first stint and get past a lot of cars it could still be an exciting race. You always need a bit of luck so a safety car to bunch up the field would help and make the race open again. We have a quick car so that is always good, let's see what I can do."

"I think it is just racing," he told Sky Sports. "That lap was never going to be a quicker lap, it was purely about giving the engine the opportunity to learn the optimum settings. It was a mistake but he will have the chance to bounce back from it."