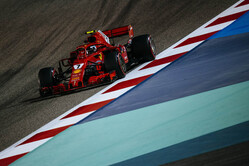 The big news overnight is that following a particularly scrappy day on Friday, things got a little worse for Lewis Hamilton when Mercedes had to change his gearbox, having revealed that it almost gave up the ghost in Melbourne. As a result the world champion has a 5-place grid penalty.

Daniel Ricciardo was quickest in FP1 but Kimi Raikkonen lead a Ferrari 1-2 when it really mattered in FP2.

Though Toto Wolff insists that the Ferraris were using a high engine mode which flattered their performance, the red cars look better suited here than their silver rivals.

Talking of Ferrari, while the team was fined 5,000 euros, Kimi Raikkonen was not penalised for the unsafe release of his car which saw the Finn park up with as loose wheel, Haas-style.

Alonso and Vandoorne stay out for a second lap as more and more drivers head out.

Ten minutes into the session and while 13 drivers have been out there are no times posted yet. Then again, much of this session is pretty unrepresentative of qualifying and he race being that it takes place in daylight.

After several minutes on total inactivity, Sainz' Renault bursts into life as the Spaniard heads out. Shortly after he is joined by Bottas and Hartley. Vettel also heads out again along with teammate Raikkonen.

Sainz posts the first time of the day (33.893), and while Raikkonen looked set to go quicker a touch of oversteer costs him time in S2 and as a result he backs off crossing the line at 42.976.

As the camera cuts to his car, Vettel reports that his right bargeboard is loose, reporting that it came loose before T1. Combine with yesterday's loose wheel that's a little worrying for the Italian team.

A 32.510 sees Hartley go fourth, ahead of Gasly, Sainz, Leclerc and Ericsson.

Hamilton heads off towards Dubai in his eagerness to get around a slow Toro Rosso. Shortly after Grosjean runs wide in T15.

As Vettel's errant bargeboard is repaired, members of the Ferrari crew form a Red Bull-style wall in an attempt to keep out prying eyes (and lenses).

Ah, we have the tyre info.

Bottas, Hamilton and Raikkonen are on supers, while the next seven drivers are all on softs. No times yet from Vettel, the Bulls, Vandoorne or Hulkenberg.

On softs, like Alonso and pretty much everyone else bar the leading three, Magnussen goes fifth with a 32.407.

Sainz improves to ninth with a 32.407 on the softs, slotting in behind countryman Alonso.

Raikkonen now goes quickest in S1, the Finn maintaining the pace in the second sector. Another purple in S3 sees the Finn cross the line at 29.868, 0.851s quicker than his teammate.

Yesterday, Claire Williams admitted that before FOM's proposals for the future of the sport it was looking "bleak" for her team, with her drivers currently filling the last two places things are not exactly looking brilliant today.

As Bottas locks-up and flat-spots his tyres, it's worth noting that Raikkonen's time was set on new tyres while Vettel's was on slightly older rubber.

Hamilton reports that when he first engages the clutch it is "very aggressive".

On supers Hamilton improves to 30.691 to go second but remains 0.82s off the pace. Once again, it is a scrappy lap, the Briton running wide in the final corner.

With ten minutes remaining the focus switches to qualifying and the remaining drivers switch to supersofts.

Hamilton begins another flying lap, but by the end of S1 he's already 0.3s off the pace. At the second split he's 0.88s down. Game over.

Vettel reports engine drivability issues in Turns 11 and 12. He is told to pit.

Hamilton is told that he is losing ground in S2 however he also advised of a power difference to Raikkonen... suggesting the Finn could be 'partying'.

Behind the big six, with six minutes remaining, it's: Gasly, Alonso, Hartley, Grosjean and Ocon.

The Red Bull duo are on track on supersofts.

Verstappen posts PBs in the first two sectors, finally crossing the line at 30.393 to go second, 0.525s down on pace-setter Raikkonen.

Woah! Verstappen cuts right across the front of Raikkonen at T1 as the Finn left the pits. "Verstappen almost took me out," reports the Ferrari driver.

Traffic is clearly an issue in the closing moments, Grosjean one of several drivers losing time as he negotiates a slower car.

While Mercedes clearly has much to do over the break, mechanics swarm over Vettel's car also, the German once again losing out to his teammate.

A strong end to the session for Renault with Toro Rosso also looking strong as does Alonso.

Down in 19th and 20th, things continue to look bleak for Williams, while Force India is also a mere shadow of the team we've witnessed over the last couple of seasons.