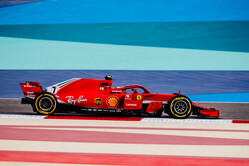 Ahead of today's second session, as the sun begins to set, the air temperature is 27 degrees C, while the track temperature is 32 degrees. As ever it is quite windy, with a strong headwind as the drivers approach T1.

Due to its timing this morning's session was largely unrepresentative, nonetheless it was interesting to note that while Daniel Ricciardo topped the timesheets, teammate Max Verstappen was sidelined by an electrics issue. Also, we saw two rare mistakes from Lewis Hamilton who ended the morning fifth quickest and 1.2s off the pace.

Possibly nothing of significance, but on the other hand we know that the world champion sometimes has these 'lost weekends'.

As Magnussen heads out to get the session underway, Vettel is out of his car which is still on its stand and being worked on.

Grosjean is the second driver to head out, the Frenchman on mediums while Magnussen is on softs.

Magnussen gets things underway with a 33.366 while Grosjean posts 33.988. Elsewhere, Leclerc, Stroll, Perez, Hartley and Sirotkin head out.

Around the world a few thousand hearts beat a little faster as Leclerc goes second with a 33.327, Raikkonen having improved to 30.689.

While a couple of drivers are on mediums, most are on softs, as Ocon goes second and Hulkenberg fourth, the latter on the white-banded rubber.

Thirteen minutes into the session and as Verstappen heads out, Ericsson has a big, big slide into the gravel at T3, throwing up a great cloud of dust. Replay shows the Swede clipped the kerb with his rear wheel.

Vettel and the Mercedes duo finally head out, the only drivers still to post a time.

"With this session being so valuable in terms of conditions, expect to see some teams splitting their strategies in order to maximise data collection," says Pirelli. "Everyone on either the medium or soft so far: expect to see the supersoft in qualifying simulations."

Another mistake from Hamilton who gets it wrong at T1, locks-up and heads off into the run-off.

On the supersofts, the first driver to use them in this session. Raikkonen heads out looking to improve on his 30.689. A purple in S1 is followed by a another in S2. At the line the Finn posts 29.817 having had a poor final sector.

Having pitted following his previous off, Hamilton is back on track, as is Ericsson. Both are on supersofts. Indeed, more and more drivers are switching to the red-banded rubber including Bottas.

PBS in all three sectors for Bottas but the Finn (30.380) remains third.

A PB in S1 for Hamilton with another in S2, the Briton eventually crosses the line at 30.472 to go fourth.

As Ricciardo and Bottas get up close and personal in T4, much to the Australian's frustration, Vettel improves to 29.828 having gone quickest in S2. The German is just 0.011s off his teammate's pace.

Bottas complains to his team that he was given no information that Ricciardo was approaching.

Following a lock-up Hartley has a "big vibration", while elsewhere Sirotkin has had a spin at T9.

Verstappen heads out on the supersofts, along with Perez he is the last driver to try the red-banded rubber.

As Stroll holds his hand up to another mistake, Verstappen improves to fifth with a 30.745. However, the youngster is unhappy with his speed on the straights, claiming that it is "unbelievable".

"Looking at the tyres used in this session gives a clue to some of the potential strategies," says Pirelli. "Both Ferraris and Bottas have only run soft and supersoft, whereas Hamilton has just run on medium and supersoft."

While Raikkonen continues on the supers, Vettel emerges on softs as Ferrari splits its strategies as the longer run phase gets underway.

While the Panthers are 13th and 14th, Gasly continues to impress in 8th, just ahead of the McLaren duo.

Most drivers are on supers except Vettel (soft), Hulkenberg (medium) and Leclerc (soft).

No pun intended, but Vettel is setting a blistering pace on his softs, impressively quicker than any of the supersoft runners.

As Hamilton and Hartley are both told to remain in traffic as the data is valuable, Ricciardo is informed that his pace is just 0.1s off Bottas'.

Told his target lap time is 36.0, Leclerc replies: "This is not achievable". Maybe not in a Sauber.

A problem for Raikkonen who has just pitted. It appears there was a problem with one the front-right wheel which wasn't fitted properly. Indeed, replay shows the warning being given but the Finn had already departed.

"I really need you to give me some information on pace," says Magnussen. When told the team will get back to him, he moans that he's been waiting for 15 minutes. He's lucky they didn't put him on hold and play Enya through his headphones.

Hamilton, on the medium, wants to "see what this tyre can really do". He's given the all-clear.

Leclerc is also unhappy, fearing that his tyres are going to "explode".

Ferrari is being investigated for the unsafe release of the Iceman.

The session ends, and as was the case at the end of FP1, one driver from each team is allowed to take part in a practice safety car race re-start.