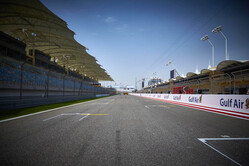 Other than routine maintenance, for the second successive year no changes of significance have been made at the Bahrain International Circuit.

On the other hand, while the DRS sectors at the circuit are broadly similar to last year, a further 100m has been added to the second zone, which now runs for much of the length of the main pit straight.

As in 2017 and 2016, Pirelli is making the supersoft, soft and medium available for the desert race

Last year's race, which was held a week later than this year's event, saw Sebastian Vettel take victory on a two-stop strategy, the German starting on the supersofts before another stint on the red-banded rubber before finally switching to softs.

A similar strategy was used by third and fourth placed Bottas and Raikkonen, while second-placed Hamilton started on supers before switching to softs for his final two stints.