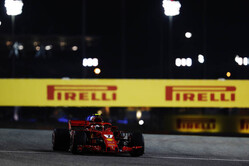 Kimi Raikkonen has escaped a grid penalty following his unsafe release in the final moments of FP2.

The Finn, on his race simulation, had just pitted for fresh tyres when he slowed and then ground to a halt with a loose right-front wheel.

At a time a number of teams are accusing Ferrari of working too closely with Haas, the incident was uncannily similar to that which eliminated both Kevin Magnussen and Romain Grosjean from the season opener in Melbourne while in point-scoring positions. On that occasion Haas was fined 5,000 euros for both incidents, the Melbourne stewards determining that the cars were released in an unsafe condition in beach of Art. 28.13.c of the sporting regulations.

Such incidents during practice sessions usually result in more than a fine with the hapless driver being handed a grid penalty, however, having viewed the video evidence and spoken to team representatives from Ferrari, the Bahrain stewards opted only to impose a 5,000 euro fine.

The stewards determined that "the car was released in an unsafe condition in breach of Art. 28.13.b, that the team ordered the car stopped immediately, and that the driver stopped as fast as he safely could,” read the FIA statement.

"Consistent with previous instances where a car was stopped on track, the Stewards decide that the mandatory grid place penalty could not be applied where the team took all appropriate actions, the Stewards fined the team €5,000."

"I felt some vibrations and it was loose so we had to stop," said Raikkonen of the incident. "It's impossible to say what everybody is doing but it's not too bad. There are things we have to improve but it's a normal Friday when you try things to test you try to learn from them."

Despite the incident Raikkonen ended the day atop the timesheets, out-pacing his teammate by 0.011s.