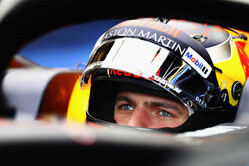 While his boss, Christian Horner, is keen to see anything banned - especially if it is advantageous to rivals and he doesn't have it - Max Verstappen is against the idea of outlawing the so-called 'party mode' used by Lewis Hamilton to great effect in Melbourne.

With a combination of the special engine mode and ballsy driving, the Briton left his Ferrari rivals over 0.6s behind in the final phase of qualifying, with Daniel Ricciardo claiming that it felt like a "punch in the stomach".

Speaking ahead of this weekend's Bahrain Grand Prix, where Hamilton and teammate Valtteri Bottas are sure to use the mode again, especially with Ferrari thought to be only 0.4s off the pace, Verstappen has said it would be wrong to change the rules.

Asked if he agreed with his boss and thought the modes should be outlawed, the youngster was adamant: "Honestly no," he replied.

"Just because they do a better job than everyone else why should you take it away?" he continued. "It's not fair to them, but it's maybe up to F1 to maybe change the rules to make it more difficult to keep developing things and stuff like that. You certainly shouldn't take it away because they are really, really good. It's unfair to them."

Asked if he understood his boss's feelings on the matter, he replied: "Well, it's the same for me. But you have to be honest and you have to be clear about it, they're just doing a better job than everyone else. Otherwise, I think we should just use the same engines. But that's not what everybody wants.''