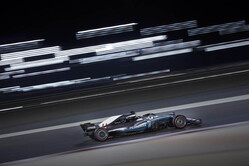 Lewis Hamilton's Bahrain weekend took a turn for the worse tonight when he was hit with a 5-place grid penalty after his team opted to change his gearbox.

The Briton finished fifth in the opening session and fourth in the second, suffering a number of lock-ups and trips through the run-off over the course of a scrappy day.

Several hours after the second session, Mercedes revealed that Hamilton had suffered a hydraulic leak during the Australian Grand Prix and was lucky to finish the race.

"Unfortunately the team couldn’t repair the gearbox within the six race cycle so he needs to take a fresh one, incurring the grid penalty," admitted the Brackley-based outfit.

The grid drop follows a similar penalty for teammate Valtteri Bottas in Melbourne, the Finn having to replace his gearbox after crashing out in qualifying.

"It looks very close between all the teams and we definitely have got some work to do to try and see if we can eke out to be ahead of the others," said Hamilton. "The tyres have felt the best they've felt here in years; very stable and with less degradation."

"Although we were untroubled by any reliability issues, and we ran through our programme as expected, it wasn't our best day from a performance point of view," admitted technical director, James Allison. "We've got more to do overnight and in the session tomorrow to give us a car that will allow us to have a good fight in Qualifying and on Sunday. The base is okay but we have not yet found the sort of edge that we had in Melbourne."