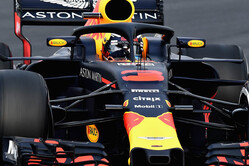 Title sponsor to Red Bull, and for some time mooted as a likely engine supplier to the Austrian outfit, Aston Martin awaited Formula One Management's proposals for the future of Formula 1 with keen interest yesterday.

Reacting to the proposals which include cheaper and less complicated engines, Aston Martin's chief executive, Andy Palmer, took to Twitter.

"We are extremely pleased to hear today's news regarding the future of Formula One," he tweeted.

"These prospective changes support many of the requirements needed for Aston Martin to enter the sport as an engine supplier," he added. "This is a very positive step in the right direction."

With Renault's contract with Red Bull due to end this year, it is looking extremely likely that the Austrian outfit will need to switch to Honda units for the next two seasons, sister outfit Toro Rosso seemingly being used as guinea-pigs (guinea-bulls?) this year.