Hartley drops to 17th and Perez 16th after penalties 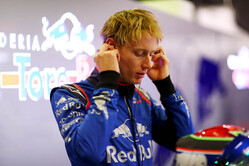 On the day that Pierre Gasly scored a remarkable 5th place for Toro Rosso, teammate Brendon Hartley is heavily penalised for pre-race incident.

Already hit with a 10s time penalty for his first lap clash with Sergio Perez, the Kiwis was subsequently further penalised for failing to re-establish the original start order by the end of the pre-race warm-up lap.

The stewards, having reviewed video evidence and heard from Hartley and a team representative, deemed that the New Zealander was overtaken by Perez during the formation lap and subsequently "failed to re-establish his position before the first safety car line and then did not enter the pits as required under Article 38.3".

As a result, the Kiwi, who finished 13th on the road, was handed a 10 Second Stop and Go penalty, "imposed after the race in accordance with Article 38.3", which equated to 30 seconds added to his elapsed race time, along with 2 penalty points, bringing his total for the 12 month period up to 4.

The time penalty means that he dropped to 17th.

As is fitting, the man that actually caused the problem, Perez, was also penalised, the stewards ruling that the Mexican overtook Hartley before turn 1 and then during the remainder of the formation lap made no noticeable effort to allow the New Zealander to regain his position. Perez also admitted that Hartley was not unduly delayed when leaving the grid to start the formation lap.

While he too was given 10 Second Stop and Go penalty, "imposed after the race in accordance with Article 38.3", which equates to 30 seconds added to his elapsed race time, he was not awarded any penalty points "as the penalty is the sufficient"

The time penalty dropped the Mexican from 11th to 16th.