Brawn: Qualifying race is worth considering 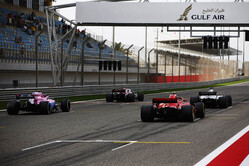 The German publication Auto Motor und Sport last week revealed that plans are being considered whereby the grid for a Grand Prix is decided by a special qualifying race on the previous day.

Indeed, Auto Motor und Sport claims that while Friday would continue to consist of two practice sessions - though both run in the afternoon - Saturday would feature a 100 kilometre sprint race, the result of which would decide the starting grid for Sunday's Grand Prix.

In a further twist, the qualifying race would see no limit placed on fuel or tyres, with the aim of seeing drivers go flat-out for the full distance.

Ignoring the question of how the grid for the qualifying race might be decided, talking to Sky Sports, F1 technical boss Ross Brawn defended the idea.

"What we've done is invited lots of stakeholders to give us a view on the race weekend," he said. "The objectives are, can we make financial improvements, help the teams in terms of their finances, can we help the promoters have a better show and can we get some diversity into the race without making it false.

"If we can get some diversity into the starting grid, which is genuine because it's come from a race, maybe that's worth considering," he continued. "Having an extra race is an impact on the teams, but we need to look at the whole thing."