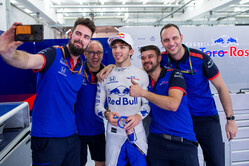 Though Brendon Hartley only just failed to make the cut into Q3, the Kiwi rookie is buoyed by the fact that teammate Pierre Gasly put the other Toro Rosso sixth on the grid - fifth once Lewis Hamilton's grid penalty is applied.

Speaking after the session, the Kiwi admitted his delight and surprise at the progress being made by the team and its new engine partner.

"The fact we've brought so much performance is really, really encouraging," he told reporters. "I think the estimate from Toro Rosso of the performance from the upgrade was quite small and it ended up being a lot larger than they estimated, which is also fantastic. It's normally the other way.

"I had the feeling this was going to be a stronger track for us anyway, compared to Melbourne," he continued. "But I wasn't expecting the performance increase from the upgrade that I had on the car today. I don't think anyone in the team expected us to take such a leap forward, to be one of the leading cars of the midfield. Obviously it's a tight battle still but it's an incredible effort.

"In Melbourne we were not there," he admitted. "OK, I qualified 16th, but that was more or less where we were, we saw the pace in the race. That was where we were. We've really made a huge step forward."

"We thought it would be quite difficult to get into the top ten," admitted Gasly. "We expected to be close to the top ten, but not to be sixth and start fifth for the race."

Asked about the difference to the car since the season opener, the Frenchman said: "The main thing is on the set-up. We have changed quite a lot our philosophy. Melbourne is really special, so bumpy, and so you need to change the set-up massively for that track.

"Here we came back a bit closer to what we had for Barcelona, found some good or interesting directions for the set-up, and just felt super comfortable with the car from FP1.

"I didn't know we'd get through to Q3," he admitted, "but it worked out and after I got through I just managed my best lap in F1 in my first Q3.

"I'm especially happy for the team, because they are working really hard," he concluded. "Also for Honda, it's good to show them that all the hard work is starting to pay off, and that they need to keep pushing and keep giving us some upgrades."

There was praise from former Toro Rosso driver Daniel Ricciardo, who starts one place ahead of Gasly.

"I'm pleased for Pierre, Toro Rosso and Honda today," said the Australian. "Not taking anything away from Pierre, but in my first year at Toro Rosso I also qualified sixth here and he has done the same. I can see him doing the interviews and he is super excited, so it's good for the team and I'm happy for him."