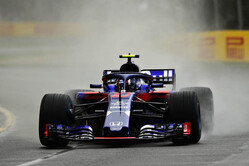 Brendon Hartley: "It was a little frustrating today, I think one tenth would have moved us up a few places and the car definitely had it in it. In the last lap there were a couple of small errors and it's frustrating to be so close to the cut off to Q2. I knew there would be huge track evolution through the run but we decided to go out first - a lot earlier than the other car - which could be considered a disadvantage but it gave us the option to maybe do two laps at the end. I think it was the right call, I just didn't quite get everything out of it to get to Q2. The good thing is the car was definitely quick enough to get to Q2 today. This morning was really encouraging in mixed conditions and equally on the long run yesterday, so I think our strength is our long run pace. Once this said, this track it's probably one of the hardest on the calendar to pass - it's a tall order! Tyre degradation will be a big story, so maybe managing tyres and a good strategy can bring us into the game. We're in that midfield battle, passing will be hard tomorrow and we'll do our best... we'll have to wait and see."

Pierre Gasly: "I'm really disappointed because it's not the first qualifying we wanted and I think there was potential to get into Q2. It was very close after the first run, but I just pushed too hard and locked up... and that was it, it was the only lap we had and by pushing hard I made a mistake. Up until Turn 3 I was two-tenths up on Brendon but this midfield is so tight that we need to get everything right. The degradation is quite high around here and at the moment we still don't know what the conditions will be like tomorrow, so we need to come back and I'll push hard to overtake. It's difficult to pass around this track so P20 is not ideal, but we'll do everything we can to gain positions. I think the car definitely has more potential so I'm ready for a fight tomorrow."

James Key (Technical Director): "It was disappointing to be out in Q1, we knew it was going to be very tight in the midfield, just a few tenths made a big difference today and I expect this will be the case in many of the races to come. Q2 was a possibility, unfortunately we missed an opportunity with Pierre when he missed his second lap, we could see how quickly the track was evolving so it was important to run again late in the Q1 session and sadly we did not achieve that with him. Brendon put a reasonable lap together, just shy of a couple of tenths which would have made all of the difference, but that's part of the learning process. We need to look at the data from the chassis side too and see what we could have improved on. We are aware we have a bit of work to do in general on our performance level over one lap and in such a tight field this is critical for qualifying position. We will now plan for tomorrow and do the best we can in the race, here in Melbourne anything is possible and our goal of scoring points this weekend has not changed. We've said from the outset that this is a building year, we are going to start off at a certain level and plan end up significantly better, we've got a long way ahead of us with this being the first of 21 races and we've got many plans in place to get to where we believe we need to be. This is step one of many steps."

Toyoharu Tanabe (Honda F1 Technical Director): "Although the morning rain stopped around midday, FP3 was still run almost entirely on a damp track. However, it dried out right at the end and qualifying was run in the dry. It was disappointing that both cars got no further than FP1. However, in general the drivers' comments about the car are positive and the gap in qualifying to those directly ahead of us is very small. In the past, we have seen that anything can happen at this track, so we will now work on being as well prepared as possible for the race, ready to make the most of any opportunity."