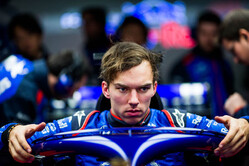 There's a certain irony in the fact that, certainly in Toro Rosso driver Pierre Gasly's case, one form of driver protection has compromised another.

Speaking to reporters following the second day of testing, during which he posted the sixth best time and completed 82 laps, the French youngster revealed that he had damaged his race suit when climbing into and out of his car.

"I don't like it," he said. "It's just a big mess to get in the car and get out. I think my suit is already broken. We'll have to ask for many suits from Alpine Stars this season.

"It's only the first day and I have many holes on the back," he added. "You need to be a lot backward to slide into the car. It's actually quite weird. With all the winglets you have on the halo you cannot really pull, to get out you cannot really touch it. It's quite weird conditions, but nothing really important. I just prefer the old cars.

"To drive with it, it doesn't make a big difference," he admitted. "In terms of visibility, it's the same. Of course you see something on top of you, which is a bit weird, but when you start to drive you focus, you're just paying attention to your driving and you don't really see it."

On a happier note, reflecting on a day which saw the Honda-powered car add another 82 laps to the 93 completed by teammate Brendon Hartley on Monday, he said: "We didn't have any trouble, the first feeling is really good, it's really positive.

"I didn't want to expect anything," he continued, "it's a new car and you always need to work at the beginning but straight away I could feel that the potential is great. I would say we have some positive things to take from today."