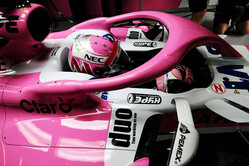 Speaking on the first day of testing, just hours after his team's 2018 contender was revealed, Force India technical director, Andy Green, revealed that the Halo device that is mandatory this year drove up the team's spending.

"Expense-wise, it's huge, because we had to do a new chassis," he told reporters. "We wouldn't have anticipated doing a new chassis this year, given the amount of changes that we made last year, which was huge for a new regulation change.

"For a team like us, we'd always look to try and get two years out of the chassis if possible," he admitted. "In that respect it cost us a huge amount to redevelop and redesign a new chassis... it's in the hundreds of thousands if not million-dollar mark to put that halo on the car. It was a huge challenge, for a team like us it was massive."

While the team is likely to have a new name in time for Melbourne, Green revealed that the car will be somewhat different also as the team learns more about the impact of the Halo on the car's aero.

"From an aerodynamic perspective, the work is still ongoing really," he said. "There's a significant downstream effect, especially around the rear wing area.

"It's not designed to be an aerodynamic device," he sighed. "It doesn't do us any favours in that department. It requires a lot of work to mitigate the issues that it causes, and we're still actively working on that, and I don't think we'll have a solution until Melbourne, but I'm confident that we'll have it under control by then."