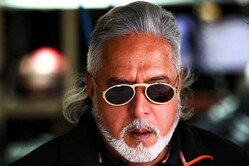 In recent days there has been speculation that the British energy drink company Rich Energy is part of a consortium considering a £200m bid for the Silverstone-based outfit.

However, while attention was focussed on the launch of Mercedes and Ferrari's 2018 contenders today, Force India, which is understood to be changing its name ahead of the new season, issued a statement denying the speculation.

"Following recent media reports speculating on the sale of Force India Formula One Team Limited, the Company's shareholders wish to clarify that there is no offer from potential investors under consideration," it read.

"The Team is focussed on the start of testing next week where the 2018 car will be presented in Barcelona on Monday. The team's drivers, Sergio Perez and Esteban Ocon, will pull the covers off the VJM11 and pose for photos in the pit lane at 8:00am local time."

While team owner Vijay Mallya is currently fighting extradition to India where he faces prosecution on charges of fraud and money laundering, he insists the reason for the team's name change is not about him looking to sell up but rather increase the global appeal of the outfit in terms of potential sponsors.

For the last two seasons the team, which regularly punches above its weight, has finished fourth in the standings.