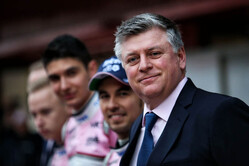 Though Force India unveiled a slightly new look to its car when the wraps came off the VJM11 in the Barcelona pitlane early this morning, Sergio Perez and Esteban Ocon pulling back the covers to reveal a new gloss livery incorporating the pink, magenta and silver of sponsor, Austrian water specialists, Best Water Technology (BWT), the name of the team remains the same.

Last year, team co-owner Vijay Mallya admitted that he was seeking to change the name of the team, revealing that this was due to a combination of India no longer featuring on the F1 calendar and his belief that the current name is off-putting for potential sponsors.

Revealing a number of possible new names for the team, it was inevitable that cyber squatters would buy up all the various options leaving Mallya and his team to think again.

Speaking in Barcelona this morning however, chief operating officer, Otmar Szafnauer, confirmed that the plan is still to change the name of the team, hopefully before the season opening race in Melbourne.

"We're talking to some people that are thinking of perhaps sponsoring the team and they are keen for a name change," he told Reuters, "but that's not for 2018, That's for 2019.

"So it could very well be that it goes until ‘19," he added, "but, you know, why wait? That's why I say it's probably more likely than not that it will happen."

Changing a team's name requires the approval of FOM as well as the majority of the teams, however, with the Silverstone-based outfit having gone through the process numerous since Eddie Jordan sold up and upped sticks it shouldn't be a problem.