Aeroscreen gets IndyCar thumbs-up from Dixon 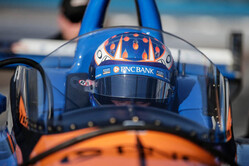 "Kudos to IndyCar and PPG," said four-time IndyCar champion Scott Dixon following his outing at the wheel of the 2018 car equipped with a prototype of the Aeroscreen-type safety device the series is considering introducing.

"There's no game-stoppers," he continued after the test, "but there's definitely things that we can improve on and make better.

"I think it's definitely a milestone as far as moving forward and moving in the right direction for some more safety initiatives, and we all know the reasons why," he added.

"It's a little bit different looking through something that's so thick," he admitted, "but I thought it would be worse with distortion, but there was nothing like that. Your brain and eyes just need to catch up to it. The longer that I ran, I got more adept to it."

One bonus of the screen that the Kiwi admitted to was noise reduction in the cockpit.

"The weirdest thing is how quiet it is," he said. "You have no buffeting. The car feels very smooth. It feels like you're in a luxury well-damped car."

On the other hand Dixon admitted that due to the lack of airflow he felt the cockpit was warmer than usual.

"The cooling thing we kind of knew," he admitted, "but we just didn't want to deal with it right now."

Despite that, IndyCar's director of engineering and safety, Jeff Horton, was delighted with the test.

"When a guy like Scott gets out, a veteran of ours, and says there's no deal-breakers, a couple of small things to look at, what better could you ask for?" he said.

Formula E champion Lucas di Grassi was quick to take to social media to give his support to the screen which has been rejected by his series, and Formula 1, in favour of the Halo.

"The aeroscreen uses same technology as the fighter jets and it was approved by Dixon," tweeted the Brazilian.