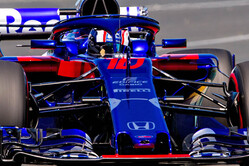 Pierre Gasly: "My best qualifying in Formula 1! It's been an amazing day…the team has been working very hard since the beginning of the weekend and it's good to see this effort repaid. I felt really good in the car so I'm very happy. Since the first lap in FP1 I felt we were pretty fast, but we knew we had to put everything together to get into Q3 and we made it! It's pretty mega! Hopefully I can get the best start possible tomorrow - we saw in FP2 that our long run pace was good so let's see! Of course we expect the front runners like Hamilton and Verstappen to come back quickly, but I think we will be in the fight with Renault and Haas hopefully, so we need to work really hard tonight and make sure we have a car as fast as today and aim to score good points in the race."

Brendon Hartley: "There's a bit of déjà vu from Melbourne, I just missed out on Q2 there, and in Bahrain I just missed out on Q3! We've definitely taken a step in the right direction as yesterday we were really on the back foot from our side of the garage. The team brought an update here which was actually worth a large amount of time. It's an amazing job from Toro Rosso to bring so much performance from the aero side to the track. I only got the new package for the first time today so I was a bit behind the eight ball but, at the end, I was very close to Q3 that I have to be happy anyway - I think everyone's done a great job. Unfortunately, I used three sets of tyres in the first part of qualifying - with hitting the bird and breaking my front wing. I don't know how the bird is, but my front wing was destroyed! It was really close today…it's a shame I made a small mistake on the last corner!"

James Key (Technical Director): "We came to this event after quite a bit of work since the race in Australia on chassis setup and quite a lot of new aero developments, both of these seem to have worked well and given the steps in performance we hoped for. We ran the aero package and chassis setup items with Pierre on Friday and got some useful data and feedback, moving Brendon to the same approach today which had a similarly positive effect. It's good to see we're back on track compared to the first race and closer to where we want to be, we have a better basis to move forwards from now. I'd like to congratulate Pierre for his first Q3 - he did a fantastic job today - he's been comfortable with the car all weekend and this translated to a strong performance this evening. It is a very tight field right now so to put the laps together like he did was a great effort from him. Similarly, well done to Brendon for a good performance today, it's a shame he missed out by less than a tenth to get into Q3; he only had one run on new tyres in Q2 and unfortunately it was just shy of the time needed to get through, but nonetheless he's made really good progress today and I think we start tomorrow in a good position with both cars."

Toyoharu Tanabe (Honda F1 Technical Director): "A strong performance from both drivers, with Pierre getting into Q3 and Brendon just missing out on the top ten by a tiny margin. The changes made to the aero package have certainly worked and this circuit seems to suit us better than Melbourne. All the sessions so far have gone smoothly from our side and that always helps. Today's performance is a nice boost for the team - well done to everyone -and now we will ensure we are as well prepared as possible for tomorrow night's race."