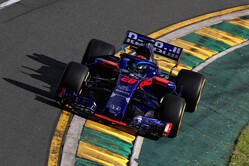 Brendon Hartley: "It wasn't a great race for me today, I locked the brakes into Turn 1 at the start and flat-spotted the tyres, so I had no choice but to pit because it was probably the biggest flat spot I've ever had. Then on the second stint I had a puncture, so it was game over from that point onwards and I think I had a little bit of damage on the rear from that, so I was driving around by myself all day. It was always going to be tough to get into the points today."

Pierre Gasly: "It wasn't a great start to the season for me. After Turn 12 the engine just switched off, it came back on again but I was really slow and I couldn't upshift. I tried to return to the pits and then I was told to stop. It's a shame, especially since we didn't have anything go wrong in testing. I think everyone in the team is disappointed to have an issue at the first race but we need to look at the positives and learn from the negatives to come back stronger in Bahrain."

Franz Tost (Team Principal): "As we had a successful test in Barcelona, we expected of course a much better race result in Melbourne, but for various reasons we couldn't get it together. For sure it didn't help that it was raining in FP3, because we would have needed a dry track to evaluate the tyres and to find out if our set up changes were going in the right direction. As for Qualifying, Brendon did a reasonable job but Pierre had a problem in Turn 3 so today we had to start from the back of the grid. Pierre had a good start and gained some positions, but unfortunately we faced a power unit issue that forced him to retire. As for Brendon, he locked the front tyres in braking for the first corner - he got a flat spot and we had to call him in to change the tyres and from then onwards he was at the back of the field. Now we can put behind a disappointing weekend - we have a lot of work to do to hopefully achieve a better result in Bahrain."

Toyoharu Tanabe (Honda F1 Technical Director): "It is disappointing that Pierre Gasly had to retire on lap 15 with an MGU-H problem. We now have to investigate the precise cause and then we have a few days of hard work to ensure we do not have a repeat of the problem at the next race.

"As for Brendon, after his early pit stop, because of a flat spotted tyre, he raced consistently, but with the difficulty of overtaking here he was unable to move up the order.

"It was a tough start to the season, however we have to move on from this and keep a positive frame of mind as we immediately start preparing for the second round of the championship."