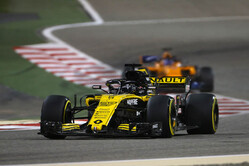 Renault Sport Formula One Team's Nico Hulkenberg took a fine sixth position in today's fast-paced and strategic Gulf Air Bahrain Grand Prix. Nico ran as high as P4 during his two-stop strategy race, where he ran a Supersoft-Soft-Supersoft tyre strategy. Carlos Sainz was unfortunate to finish just shy of the points, crossing the line in P11.

Nico Hulkenberg: "We got the maximum from the race today, which is a good positive. We didn't quite have the pace to compete with the cars ahead of us and that leaves me a little disappointed, so it's clear the midfield fight is very close. It was a busy race and our main focus was fuel saving whilst still trying to race other cars and I think we managed that quite well tonight."

Carlos Sainz: "I was surviving in the end there with very tired Soft tyres and having to do a lot of fuel saving. We need to analyse what happened at the start because I had too much wheel spin and from there onwards the race was compromised. I was stuck in traffic after both stops and we couldn't really do a lot from there. It was a tough day to be honest, but luckily China is just around the corner and we will fight our way back to the points."

Cyril Abiteboul, Managing Director, Renault Sport Racing: "It was an action-packed race that nevertheless saw us score a fine result with Nico who put in a great drive on a track that is difficult for us. Carlos' poor start penalised his race, which proved, once again, that every detail counts. Carlos finished just outside the points, which is disappointing, but he did the best he could with fuel management that became very complicated in his race to move back up the order. We had good pace in qualifying and the performance level of the car should see us qualify higher on the grid and thus have easier races. Sixth place for Nico keeps us in a good place in the Constructors' Championship with a points total in-line with our objectives, but the race pace wasn't very good in particular with the Soft tyres, which needs to be analysed, understood and improved as soon as possible."