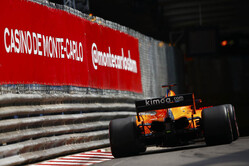 Stoffel Vandoorne headed McLaren's practice for the Monaco Grand Prix, finishing an encouraging eighth quickest after two tricky sessions around the unyielding streets of the Principality.

Fernando Alonso, who lost most of the morning session while his mechanics removed the floor and bodywork to trace the source of a brake-by-wire sensor issue, ended the day ninth, just 0.038s behind his team-mate.

Neither driver declared themselves completely happy with the balance of the car; accordingly, the engineers will spend tomorrow's extra day working to refine the set-up ahead of Saturday afternoon's ultra-critical qualifying session.

"In the first session, I had an issue with the brakes and we lost most of the morning. That was quite disappointing because you need as many laps as possible around here to build up your confidence. The guys in the garage did a great job and the car was fully ready for the second session, when we were able to recover some of those lost laps.

"Due to the track evolution, you drive one car in FP1, a different one in FP2, and an entirely new one in qualifying, where you are two seconds quicker. So it's important to adapt - we need to be flexible. Qualifying here is 99 per cent of the race, so once you put a good lap together on Saturday, the race becomes a little bit easier.

"There's still more to come from us. Hopefully, we can put a good lap together on Saturday."

Stoffel Vandoorne: "It's been a pretty tricky Thursday, actually. The sessions didn't go as smoothly as we'd wanted: FP1 was difficult, but we made a big step during FP2. That was when things came together, but I still think we can take another step forward for Saturday and be in a better position for qualifying.

"Confidence is everything around here. The car was a bit of a handful and a bit unpredictable today, so we struggled a little bit. Still, by the end, we managed to set some decent lap-times.

"The times are so close - you can't leave anything on the table this weekend or else you'll find yourself out in Q1. It's going to be up to us to make the best out of it, do everything perfectly and do a proper job. Fortunately, I still feel there is a bit to come from us."

Eric Boullier: "You always think you're ready for another Monaco Grand Prix weekend, but then never fail to be awestruck by the sheer spectacle of Formula 1 cars racing at speed around these fast, narrow streets.

"Today, we had a relatively pain-free pair of sessions - Fernando's running was delayed this morning by a small brake-by-wire issue, but we ended the day with plenty of mileage under our belts, and lots to analyse tonight and tomorrow ahead of qualifying on Saturday.

"There's still plenty of work left to do: neither driver really felt that they had full confidence in their cars today, so we'll be diving deep into the data to see if we can turn that feeling round for Saturday. Confidence is everything at a place like this, so it'd be hugely beneficial for us if we can address those issues."