Liberty eyes track resurfacing in bid to spice up racing 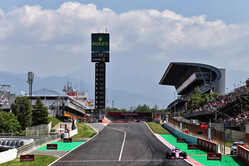 Though the season got off to a slow start in Melbourne, where there were only 5 recorded passes, this coming on the back of a season in which overtakes were down 50% on the previous year, the races that followed produced some high drama and unexpected results. And then came Borecelona.

As part of its desire to be a "fan first focussed entity" Liberty Media is considering all manner of options to spice up the core product, the racing, and now into its second year at the wheel, the American company is clearly willing to consider anything.

With an eye on the role tyres play, be it the susceptibility to high temperatures, the time it takes to get them working efficiently, degradation and all manner of other aspects, Liberty boss Greg Maffei has revealed that there is one avenue the sport is looking at.

F1 technical boss, Ross Brawn, is currently working with his team on a set of regulations for 2021 intended to drastically shake up the sport, which, in tandem with the proposed changes to the way the prize pot is divided, is intended to level the playing field to the extent that F1 is no longer dominated by one or two (or three teams).

Along with a new engine formula, Brawn is looking to reduce the reliance on aerodynamics in a bid to produce close, more even racing.

But it isn't just the cars and engines that the sport's technical boss is looking at.

One of Brawn's tasks is to "work on things like making it more exciting on track," says Maffei, according to the Independent. "And there are a host of really simple things there from when tracks get resurfaced, or tracks are rebuilt or renewed, that you have the right kind of surface so there is tyre degradation so that there are enough tyre changes to make it an interesting story. That you have the right changes, turns and chicanes where there is likely to be overtaking. So there are things around that."

Since last year, the Barcelona track was completely resurfaced, and while the end result was Pirelli having to produce special tyres for the Spanish track this year, whether the resurfacing improved the racing is one for the fans to decide...

On the other hand, with race organisers already struggling to meet the financial demands of the sport's owners, one can only guess how the likes of Silverstone will react to being instructed to resurface the track in order to (hopefully) improve the racing.

The resurfacing at Barcelona cost an estimated £2.6m and was carried out not with F1 in mind, but because the existing tarmac was considered too rough for MotoGP, and consequently the entire track was resurfaced for the first time in 14 years.

The previous track surface was fine for F1, but leaving it as was could have seen the track lose others forms of racing, and it is the money from these other disciplines that help meet the financial demands of F1.

As negotiations with officials in Miami get underway, the future od a number of races is in doubt, with Silverstone set to drop from the calendar after 2019 and Hockenheim currently on a biennial contract.

Clearly hurting, race organisers are looking for an overhaul of a system which sees them pay through the nose to host races, while needing to meet a hefty annual increment, and having to watch as revenue from TV, trackside advertising and hospitality goes to F1. Furthermore, few will have failed to notice the sizeable number of empty seats at last week's event.

Speaking earlier this year, a source close to the association which represents the circuits said "no contract will be renewed under the existing financial conditions. We are talking about a reduction in fee for sure."

With talk of Miami getting its race for free, the idea of being ordered to resurface their circuits, thereby further driving up costs, is hardly likely to go down well with circuit bosses.

Furthermore, the proposal evokes memories of Bernie Ecclestone's tongue in cheek suggestion that trackside sprinklers be used to wet the track and liven up races.

Tongue in cheek or not, such moves are seen as artificial and a deliberate means of influencing the result.

In the meantime, as Liberty puts together it plans for post-2021, and the rhetoric from Ferrari and Mercedes appears to cool, Maffei makes it clear that Liberty intends to stand firm on its plans for the financial restructuring of F1.

Liberty is "trying to do things where you are limiting the cost so there's not an enormous advantage," he says. "If you think about sports leagues, in some ways, the best one, the most socialistic one, is the NFL. Hard salary cap, strength of schedule, drafts that are low to high in terms of what order you draft. That is all very positive to have those kind of factors.

"At the other end, something like La Liga in Spain where 90 per cent of the TV money is going to the top two teams is unlikely to create diversity, so we are trying to tilt the playing field a little bit more like football where there is a cost cap on what can be spent on the car, there are rules around simplifying the engine and being able to create neutral suppliers.

"There is work to be done on some historical bonuses and artefacts where certain teams got extra money. That needs to be tilted so that the winners get more money but not so much more than the losers that the losers are never able to catch up and be competitive. So you are trying to build a bunch of those factors in."