Whiting: FIA seeking to do away with grid penalties... by 2021 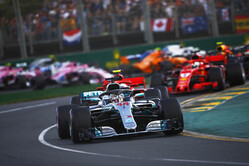 While that of Sergey Sirotkin - unsuccessfully challenged by Williams yesterday - was down to the driver, as was that handed to Daniel Ricciardo, who was handed a 3-place penalty for his home race for not staying above the minimum time set by the FIA ECU under the red flag during FP2, and Marcus Ericsson for not slowing while a double yellow flag was being waved in the aftermath of a spin by his teammate in China, the remaining three were under the engine and gearbox regulations and involved Valtteri Bottas, Lewis Hamilton and Nico Hulkenberg.

With 17 races remaining and drivers limited to just three engines - not to mention talk of teams taking strategic penalties - there are fears that the latter stages of the season could become a lottery as the penalty toll mounts.

While many, including the sport's technical boss, Ross Brawn, want to see grid penalties done away with, Charlie Whiting admits that it is unlikely to be before 2021.

"We would like to get rid of all grid penalties, if we could, that's what we're working towards," he said, according to Motorsport.com.

With an eye on the gearbox penalties in particular, asked if there might be a change in the rules any time soon, Whiting replied: "There is no need. It is a good system we have.

"I think if we changed anything it would be to a pool of gearboxes, like we have a pool of engines," he added. "So you are only allowed three gearboxes for the year and do what you like with them, but that's all you will have.

"It is one of the things we're thinking for 2021. We are introducing a fairly comprehensive package with a number of changes."