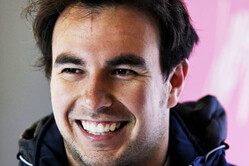 Sergio Perez, Lance Stroll and Kevin Magnussen have all escaped punishment for a DRS infringement during today's Azerbaijan Grand Prix.

All three were hauled before the stewards for using their DRS when not permitted, a breach of Article 21.5 c) of the Sporting Regulations.

However, speaking to each of the drivers, each of whom was accompanied by a team representative, the stewards opted to take no further action.

"It is apparent that to move to the "default" setting if the DRS system malfunctions, requires the team to convey to the driver, by radio, a series of steps to adjust various settings," explained the stewards.

"In this case, the DRS light came on and as this was the first time the driver had experienced a default operation for the DRS, there was some misunderstanding of the procedure and the driver incorrectly activated the system manually.

"The system however, was only activated twice, each time for a short distance before the driver and team recognised the error."

Consequently, the stewards were satisfied that no car was overtaken through this incorrect use.

With Perez having finished third, thereby scoring his first points of the season, despite a first lap pit stop after being hit by Sergey Sirotkin, there were fears his podium place was under threat.