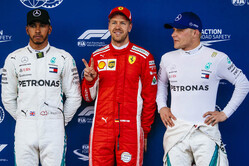 Sebastian Vettel is in pit lane and will be out here to speak to us soon, but let's go and talk to the Mercedes guys who had such a quick car today but maybe not quite enough. Lewis, that first sector was phenomenal, just seemed to lose something in the second, but are you happy with your job today?
Lewis Hamilton: Yeah, well firstly you've got a great crowd here - hi, everyone. That was close! We did the best job we could. Jeez, I think I was up three tenths until Turn 15 and then I came across the line two tenths up, so I lost a little bit in the last sector. But regardless, Sebastian did a good job. They were quickest all weekend. They've obviously got a phenomenal car this year. But really happy with the job the team did to get us from where we were yesterday to where we are today. Valtteri did also a great job. We're in the mix. This is the fifth-best track to overtake, I think. It doesn't mean it's impossible but I'll try to give Sebastian a hard time tomorrow.

As we saw from even the place markers being pushed away by the wind when you got here, how windy is it out there? How hard is it?
LH: Down the straight particularly it's hard to keep the car straight. You're getting crosswinds in between buildings, so you're constantly correcting the car, but the track has been great today, so I appreciate everyone in Azerbaijan for having us.

Great job, Lewis, and what about this guy? Seb, unbelievable job, three poles in a row, looked phenomenal out there. I know on your second run you were going for faster but a bit of a lock-up stopped you from doing that but you were phenomenal today.
Sebastian Vettel: Thank you. I felt the car was good in Q2 and Q2 and then in the last segment of qualifying I knew I have it, I have the car that does what I want. Not have it as in pole position, but that I could get a good lap together. The first lap I was really happy, there were maybe two tiny bits where it wasn't exactly perfect, but I knew on the second run that the track would ramp up and that I would have to go out and get it again. I was a little bit down on the time, a little bit faster and then I locked up. It caught me by surprise for Turn 3 and then I wasn't sure, do I go straight or do I try to hang on to it. I tried to hang on to it but, yeah, fortunately it was enough. I really had a good lap on the first attempt, so really happy.

Beautiful job. Don't go anywhere. Hey Valterri, great car, quick car, can you take the fight to Ferrari tomorrow?
Valtteri Bottas: Yeah, for sure we can. We are there with both cars now. It's been really happening this season so we are starting very close. The race here can be really crazy, so we are up for the fight.

Right until the last lap, to the last inches it can be crazy, you know that better than anyone from last year?
VB: Yeah, sure. Last year I was one lap down after lap one and I ended up second, so anything can happen but at least now we have a good starting point.

Seb, we come back to you. It's been a great day, but this is only the start. Mercedes are in the mix, Red Bull are in the mix. How hard is it going to be tomorrow? Even just that run down to Turn 1, how tough is it going to be tomorrow?
SV: It's not that long. That way is a lot longer! I think it will be an intense race. Here, anything can happen, safety cars are very likely. The good point is that our car was really good this afternoon, so we should be in a good place tomorrow. Yesterday I struggled a bit with confidence, with trust in the car, and just rhythm, which is important around here, but today, when it clicks it just keeps coming and it was really enjoyable. I'm a bit upset with my final run because I thought I had a little bit more but we got pole so we can't be much happier with how the day went.

Sebastian, how happy are you after this one, particularly after yesterday when you said you were lacking confidence in the car?
SV: Well, lack of confidence in the car, leading into lack of confidence around the track. I think around this place you need to have the trust, otherwise you don't dare go as quick as you might be able to. At the end of the session I was quite confident and today I was able to carry that into the day and the car was amazing. It just kept getting better. The track picked up quite a bit through qualifying. Q3 run one I was really happy. There was maybe a tiny bit in the middle sector - in Turn 6, Turn 11 - where I was a bit greedy and went a bit wider than I should, but the rest of the lap was really good. Also, I ha da good exit from the last corner, which was incredibly difficult today, with the wind playing tricks on all of is I guess, and even a little bit of a two with the car five, six, seven seconds ahead, so I was really happy how that lap came together. And then for the second run I knew there was a little bit more in those places that I mentioned and the car was on fire straight away but then I think I got a bit too excited for Turn 3 and tried to brake later, quite a bit later, than the laps before. I must have hit the bump as well and locked the front. From then onwards the front left was flat-spotted. I was quite upset at the time in the car, because I burnt my shot at an improvement and I didn't know what was going around me. So when I then aborted the lap and I was told pole position then obviously I was really happy. I think the team has done well. We've changed the car again overnight and found even more performance.

Lewis, we haven't had you in the qualifying press conference for the last couple of races, so what news from Mercedes? Is the car much more to your liking?
LH: It's good to be back. I hope you haven't missed me too much. Sebastian did a great job today, congratulations to him. Ferrari have been so dominant in the last couple of races and pace-wise we knew that they would be very quick here. Which they have been all weekend. I think Red Bull also looked really promising, not sure what happened to them. And we were struggling yesterday, but we came into today and the engineers did some really great work last night to understand where we were and how we could progress forwards, so a big thank you to them for all their hard work. Today was much more reasonable car. There were still areas where we were lacking but it's a work in progress I would say and to be that close to the Ferraris is definitely a positive and to have me and Valtteri up there is a good booster for the team, to be right there in up in the mix. Excited for the race. It's very hard to overtake here as it is anywhere around the world, but we'll give it everything we've got.

Valtteri, how was the session from your point of view, and can we also have a word from you about the conditions. The wind seemed to be changing direction the whole time.
VB: I think, like Lewis said, we made some good progress since yesterday. The end result today was a lot better than what we saw and thought it could be today. We believed we can fix the issues, just like we did here last year here actually, from Friday to Saturday and, yeah, we were still finding out way with the setup in Practice Three and made it even better for qualifying. Definitely the best car I had this weekend, so far. I think the session was pretty straightforward. At the beginning lots of yellow flags and difficult to put the lap together but after that Q2, Q3, really straightforward. I felt that I could never quite get the perfect lap. It is extremely difficult here - and, especially the second run I was still missing something. I feel maybe still Ferrari was too quick for us but yeah, as a team reasonable result now. We have both cars in pretty good position to fight for the win.

Questions FRom The Floor

(Scott Mitchell - Autosport) A question for the two Mercedes drivers. What exactly did you have to change after yesterday's session and how much of a difference did it actually make in the car? What was different about the cars' handling today?
LH: Just setup. Yesterday we were sliding around a lot, so setup wing level, ride heights. Pretty much everything on the car. Did a lot of changes.

Valtteri, anything to add from your point of view?
VB: No, no I think we had similar direction where we were heading since yesterday with both cars and definitely it was better.

(Luis Vasconcelos - Formula Press) Also for the two Mercedes drivers. You seemed to be able to match the Ferrari's pace in Sector One, almost in Sector Three but Sector Two as the most difficult for you guys. What's not happening in your car in the Old City section?
VB: Yeah, I think we have seen that all weekend really. Especially the sessions earlier to qualifying. Sector Two is the twisty section and I think we've been struggling a little bit more than other cars, riding over the kerbs in some places, which might cause a bit of lap time loss for us. I think the main issue has been getting the tyres to work, and that can be made through the setup of the car. I think we've made it better. Obviously, they are still doing something better in Sector Two and getting the tyres to work, and being able to ride over the kerbs.

Lewis, anything to add?
LH: The middle sector, I can't really explain it. I think they have a little bit more downforce than us.

(Phil Duncan - PA) Lewis, Bernie Ecclestone had some complimentary things to say about you yesterday. Said you're super quick, super talented and a super nice guy - but he also said that he didn't think you're the racer you once were and that you appear fed up with things. Do you have any response or comment about that?
LH: Not really, no.

(Phil Duncan - PA) Are you as good as you've ever been, do you think?
LH: We'll see at the end of the year.