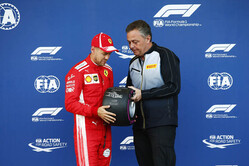 Ferrari driver Sebastian Vettel claimed his third pole position of the year, using the ultrasoft tyre, after a tense qualifying session where tactics were at the forefront.

Mercedes, Ferrari and Red Bull all started the Q2 session on supersoft tyres, but switched to ultrasofts in the final moments, as an insurance policy in case the cars around them went faster. All of them apart from Ferrari's Kimi Raikkonen set their fastest times though on the supersoft, which means that they will start the race on this compound.

Conditions were once again cool in Baku, with track temperatures during qualifying peaking at 27 degrees centigrade.

Mario Isola: "One stop is the most likely option for the race tomorrow, but there are a number of different combinations of one-stopper possible. The top five are starting on the supersoft tyre, which then gives them the flexibility to decide whether to complete the race on ultrasoft or soft after a longer first stint, depending on what happens. We've already seen a few incidents on track both in Formula 1 and Formula 2, so the chance of safety cars and other delays is high. This means that all strategies will have to remain flexible and there's also the possibility of benefitting from a 'free' pit stop if the timing is right. The mix of strategies seen already adds another interesting variable to what is already a very intriguing race in Azerbaijan."