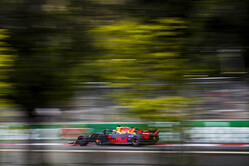 Drivers used the free practice sessions on the slippery Baku circuit, to assess tyre degradation in the unique characteristics of the second-longest track on the calendar and the fastest street circuit of the year, during a race weekend held two months earlier than last season.
This meant that track conditions were significantly cooler than 2017, with FP2 finishing in ambient temperatures of 21 degrees centigrade and 27 degrees on track. As the Baku street circuit is only used once a year, there was a high degree of track evolution, but last year's fastest times in FP1 and FP2 were both beaten. There's currently a gap of around 0.8 seconds between supersoft and ultrasoft, with the gap between soft and supersoft still to be accurately established.

Mario Isola: "The cooler conditions of this year's race obviously had an effect on tyre behaviour, also combined with track evolution. In particular, the main challenge is to get the rear and the front tyres working in balance with each other: the very long straight has a tendency to cool the tyres down anyway, and this is only exacerbated by the lower ambient temperatures this year. These lower temperatures favour the ultrasoft with its lower working range, and so far we are seeing around 0.8 seconds per lap difference between the supersoft and ultrasoft. Another issue that the drivers are having to deal with is front-locking due to a combination of the low-grip and sometimes bumpy surface, together with the effect of tyres cooling down on the straight. As more rubber is laid down on track, this picture may change, but the extremely close gaps at the top of the field already suggest that we are in for an interesting and unpredictable weekend."