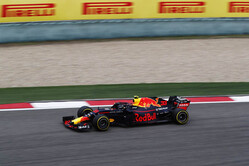 Mercedes driver Lewis Hamilton topped both free practice sessions in China, using the soft tyre in the morning and then the ultrasoft to go fastest in the afternoon, with Ferrari also within a tenth of a second after FP2.

The forecast of rain did not materialise until right at the end of the session, but temperatures remained cool and cloudy, with 19 degrees centigrade ambient and 21 degrees on track at the end of FP2.

Teams concentrated on gathering data across all three compounds with different fuel loads in order to formulate their race strategies, with a dry race expected on Sunday. A lot of the work consisted of direct tyre comparisons, with teams assessing the overall performance of the ultrasoft compared to the medium and soft.

Mario Isola: "This is the first race of the season where we have a gap between the compounds, with our nominations being medium, soft and ultrasoft, missing out the supersoft. The thinking behind this strategy was to have a fairly even time gap between all three compounds available. This has proved to be the case so far, with a gap of about 0.9 seconds between medium and soft, and a slightly smaller one between the soft and ultrasoft, leading to a total difference of around 1.6 seconds from medium to ultrasoft. This should lead to some interesting strategies, with some cars seeming to be more at home on certain compounds than others. A lot of this behaviour is of course influenced by weather, and it looks like teams will have to adapt their cars and strategies to what are likely to be slightly warmer conditions in the race, which should play to the strengths of the harder compounds available, with a higher working range."