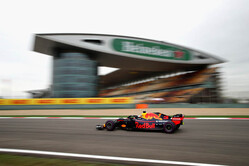 While Ferrari and Sebastian Vettel has opened its 2018 account with a brace of wins, the Italian team hasn't won in Shanghai since 2013, whereas Lewis Hamilton has won here five times, most recently in 2017.

While the Silver Arrows need to hit back, Red Bull also needs a good result this weekend, Force India and Williams also need to produce something following their own dismal starts to the year.

With an eye on the dark clouds, there is an immediate flurry of drivers heading out, just moments into the session all but Verstappen and the Mercedes pair have been out.

As Hulkenberg complains that his radio is only working in one year, it's worth noting that this weekend sees the ultrasoft's Shanghai debut, Pirelli opting to jump a step this year by bringing the medium and soft but missing out on the super.

As Stroll posts the first time of the weekend (42.648), Hamilton heads out.

Thus far we've seen a mixture of mediums and softs with only Vandoorne running the ultras.

Just over ten minutes into the session and Alonso heads out, the Spaniard pushing the McLaren all the way. He subsequently stops the clock at 38.765.

Raikkonen runs wide in T14, the chilly conditions not suiting the Ferrari.

Both Ferrari and Mercedes are trying different rear wings back to back, if you'll forgive the pun.

Raikkonen goes quickest (of three) with a 37.651 as we see Alonso running wide and losing a heap of time.

Another mistake for Raikkonen, this time in T11 as he gets all crossed up, but he is clearly on top of things and does well to hold it all together.

As more drivers head out, Verstappen is warned of a strong tailwind in T6.

A 36.963 sees Ricciardo go quickest, but in moments he is leapfrogged by Vettel and then Bottas, the Finn posting a 36.587. Raikkonen also subsequently improves, posting 36.679 to go second.

PBs in all three sectors see Verstappen go fourth (36.966) but a 35.218 from Hamilton, on his first flying lap, demote the Red Bull driver to fifth.

Told it is very windy, Vettel replies "Yeh, I can feel it", before reeling off a list of the corners where it is most noticeable. Wind or no wind, the German improves to second with a 36.386.

"One of the big factors influencing performance here is not just the temperature but also the wind," Pirelli kindly points out. "Very windy today, which influences car behaviour via the aerodynamics."

Hamilton improve with a 34.962 and Bottas 35.701 as Grosjean and Magnussen go best of the rest by taking seventh and eighth, albeit 2s off the pace.

Behind the Mercedes, Ricciardo is now third ahead of his Red Bull teammate, the Ferraris, not liking these chilly conditions, fifth and sixth. The Mercedes duo posted their times on soft, while the Bulls were on mediums. Vettel was on softs and Raikkonen on mediums.

Bottas improves to within 0.224s of his teammate.

At the 40 minute mark, as the extra set of tyres is handed back, it's: Hamilton, Bottas, Ricciardo, Verstappen, Vettel, Raikkonen, Ocon, Grosjean, Sainz and Magnussen.

After the, now traditional lull, Alonso gets proceedings underway again, the Spaniard back on the ultras.

Bottas is quickest through the speedtrap thus far, ahead of Vettel, Hartley, Hamilton, Ocon and Perez.

Sergey Sirotkin will be suffering altitude sickness, the Russian posting 36.691 to go tenth.

Quickest in S1 Bottas goes quickest (34.661), but Hamilton responds with a 33.999 having gone quickest in all three sectors.

As Vandoorne runs wide in the final corner, Ocon complains of understeer.

Vandoorne warns of a "few drops of rain". Shortly after Vettel reports a "little drizzle".

Verstappen takes a trip through the gravel after getting the rear end completely out of shape in the final corner.

As more drivers switch to the ultras, Magnussen improves to 5th with a 35.178.

Verstappen reveals he has a flat-spot following his moment.

Still on softs, Hamilton goes quickest in S2 when he subsequently spins at T11. The Briton heads back to the pits.

Leclerc reports some debris in T1, the youngster unclear if it's from teammate Ericsson's car.

On the ultras, Raikkonen improves to third with a 34.475, albeit 0.476s off Hamilton's best which was set on the softs.

Out comes the yellows as Vandoorne goes off at T10. The youngster does well to keep it out of the wall. The replay doesn't reveal what exactly happened other than the car suddenly snapping out.

In the meantime, Raikkonen has improves to second with a 34.358.

"I did a mistake in the last corner," admits Leclerc with refreshing honesty.

As the session winds down, and the rain holds off, attention switches to longer runs as opposed to fast times.

On 28 laps, Ocon and Sirotkin have completed the most laps, ahead of Perez (27) and Alonso (26), while Raikkonen has only completed 14.

Hartley unhappy with the pace (or lack of it) of the Haas (Grosjean) running ahead of him.