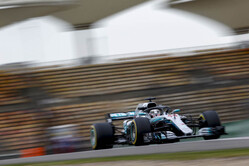 The chilly conditions and blustery winds caused problems for almost everyone earlier, with even the best of them struggling to remain on the black stuff.

Unfortunately it remains cold and windy.

While Kimi Raikkonen was second quickest, splitting the two Mercedes drivers, the Finn was on ultrasofts while the Silver Arrows never went any softer than soft... if that makes sense.

Hamilton was one of those who fell foul of the grip conditions, as was his old mate Verstappen who ran wide on his final flying lap just he looked set to improve.

Behind the usual suspects, Magnussen was seventh, ahead of Sainz, Grosjean and Hulkenberg.

While there were a number of offs earlier, none of them were too serious, though Vandoorne did well to keep his McLaren out of the wall.

Last year, of course, the second session was scrapped due to the weather, this time around however there is only a 40% chance of rain.

The lights go green and Grosjean leads the way, followed by his Haas teammate. The Frenchman on softs and the Dane on mediums.

Bahrain sensation Gasly is next out.

Grosjean posts 36.927 with Magnussen crossing the line at 37.656, both drivers having little moments at various points of the track.

A 36.708 sees Hartley go quickest as Raikkonen is told to box, his team informing him that there is an issue.

Sirotkin goes third on ultras, along with Stroll the only driver using that compound at this stage, but is demoted as Alonso and Perez (35.696) go quicker. Ocon subsequently goes third with a 35.993.

Another mistake from Hamilton, the Briton locking-up in T6 and running wide. Meanwhile his teammate posts 34.387 - on the mediums - to go quickest.

Hamilton confirms that he has a "big flat-spot" following his lock-up. Nonetheless, flat-spot or not, he goes quickest with a 34.179.

Back on track following a software issue, Raikkonen follows Hamilton's example and locks-up at T6.

Another mistake by Hamilton as Vettel improves to third with a 34.410.

Both Ferrari and Mercedes have split their tyre strategies, one driver on softs the other on mediums. In the German team's case the soft shod driver is quicker while at Ferrari the medium leads the way.

Asked if he wants to do another lap, Ricciardo responds "I'll have a think". After much debate, and having been assured he has enough fuel, he opts for another lap.

Raikkonen (softs) improves to second with a 34.311 as Hulkenberg switches to ultras.

Hamilton is back on track, and for the first time today is sporting the purple-banded rubber.

As Hulkenberg goes third on the ultras (34.313), Hamilton goes quickest in S1 and then S2. At the line the world champion posts 33.482, the Briton losing time in a couple of corners, T11 being a good example, as he appears to push too hard.

As Bottas heads out on the ultras, the similarly shod Toro Rosso duo go eighth (Gasly) and ninth (Hartley).

Told he can do another lap, Hamilton admits: "There's nothing left in these tyres". We're not surprised.

Verstappen stops the clock at 33.823, the Red Bull driver quickest in S1.

While Raikkonen sticks with softs, Vettel now tries the ultras.

Grosjean spins at T11 in an incident very similar to Hamilton's at the same corner in FP1.

After 40 minutes, Vandoorne and Ericsson are the only drivers yet to run the ultras in this session. At which point the Belgian heads out sporting a set of the purple-banded tyres.

"Work in free practice is essential for formulating race strategy," says Pirelli, "particularly when there's a gap between the compounds like there is here. It looks likely that we could see some different strategies in qualifying and the race. More strategies = more fun!"

Not for the first time this year, Raikkonen is quicker than his teammate, benefitting from a tow from Vettel the Finn crosses the line at 33.489, just 0.007s off Hamilton's pace.

Finally on the ultras, Ericsson goes 17th (35.624). The Swede is told he's losing out to his teammate in T6 and, especially, T16, where he is losing out on the entry, middle and exit.

As ever, attention now switches to Sunday afternoon, as the teams begin their race simulations.

Hartley reports that his car is "progressively getting worse and worse, front and rear".

Asked about the balance, Verstappen responds that it is a bit mixed, front and rear.

"I'm falling off the cliff of the tyre," warns Sainz, degradation clearly an issue for all drivers this afternoon. Worryingly, the Spaniard's current set have only done 10 laps. He subsequently pits and switches to mediums.

With 25 minutes remaining, Vandoorne is warned of "rain in eleven minutes".

Told it's OK to use DRS to pass the car ahead, Hulkenberg responds: "I don't need permission for that!".

Drivers now switching to softs and mediums, most seemingly glad to be rid of the ultras. A number of teams, especially the big three, have their drivers on different compounds.

Gasly returns to the pits, his ultras having lasted a remarkable 22 laps.

Vandoorne stops on track at T5, the Belgian reporting that his right-rear wheel is loose. Looks like another unsafe release. "I need to stop the car," he warns his crew, "the tyre is not on".