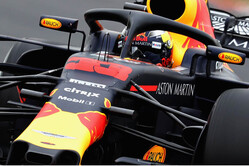 2016 was the season in which Max Verstappen finally arrived.

Changing places with Daniil Kvyat following the Russian Grand Prix, the Dutch youngster marked his move to Red Bull with a win at the first attempt and over the remainder of the season delivered some of the most talked about performances. Indeed, despite having caused the FIA to tighten up its rules in terms of newcomers age and experience, for the second successive season the teenager picked up the governing body's awards for his numerous daring passes.

According to the Red Bull driver, currently in the spotlight following a number of incidents which have seen him tangle with the likes of Lewis Hamilton and Sebastian Vettel, 2016 was also the season when he had most fun, the youngster lamenting the regulations, introduced last year, which have negatively impacted overtaking.

"It was a lot more fun in 2016," he tells his own website. "You could follow each other better and, in some way, it was more gratifying.

"Since 2017 it's a lot harder and less fun to really race each other," he continues. "The braking distance is shorter and it's just very hard to follow each other, the car can also make unexpected movements and suddenly break out."

Asked if there should be a change to the regulations to bring the field closer together, he replies: "For Formula 1 in general it would be good if everything gets closer together, so what you have to look at is the engines. The difference between them is still too big."

"As far as results not that great," he adds, "but the car is okay. We are still a bit short in qualifying, but in the races, it's looking good.

"So far, due to various reasons, we haven't achieved the results we wanted, but now I'm looking forward to Baku. I think we can have a good race there, and there are still eighteen races to come, so hopefully we will do well.

"The car is in a good condition and I think it will be even better on a street circuit," he adds, referring to this weekend's race in Azerbaijan. "I am very much looking forward to it in any case!"

Asked if he would like to be free to choose his own compounds for races, rather than have Pirelli dictate the compounds, he replies: No, actually I don't, I would only like to see a soft and a hard tyre, but ultimately people do not have to know if it's ultrasoft or supersoft.

"When you go to a track and you take an ultrasoft and a soft, then you call the ultrasoft a soft one and the soft one will be the hard tyre. I think people do not care how soft the tyre really is."

Indeed, the youngster doesn't believe Pirelli's strategy in 'missing' a step in China was a good move certainly in his case. "I expected a bigger difference, because I did a stint on the ultra-soft tyres which was just as long as the others on a soft tyre," he admits.