Whiting to present solution for unsafe releases to teams 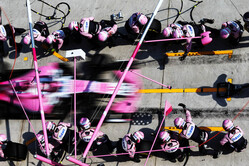 In the wake of a spate of incidents in recent races, the worst of which saw a Ferrari mechanic hospitalised, the FIA has been carrying out an investigation into how pit stops might best be made safer.

At the season opener, both Haas cars were eliminated whilst in point scoring positions, having been released with loose wheels. Two weeks later, in Bahrain, Kimi Raikkonen was involved in two incidents, the second of which, during the race, saw him run over one of his crew, while in China McLaren was fined for an incident involving Stoffel Vandoorne.

"We can introduce a few things to improve, to decrease the likelihood of mistakes," Charlie Whiting told the official F1 website. "We have learned something. We need to again analyse things to ensure things that we do, we do it precisely to make sure everyone follows that.

Pit stops, which now regularly see a car fitted with four new wheels in just two seconds, have become one of the sport's wonders, and there are fears that introducing a minimum time or reducing the amount of crew members involved, would compromise the mystique.

On the other hand, the sport doesn't want to risk another incident such as that witnessed in Bahrain.

One of the ideas being put forward is for all teams to use two wheel gun sensors, a practice already in use by a couple of teams - one sensor measuring the torque - thereby confirming whether a wheel has been tightened correctly - and another to monitor the exact position of the wheelnut, a move intended to sense cross threading, the cause of Haas' failures in Melbourne.

"I don't think there's any reason to standardise the system," says Whiting. "We need to make sure among other things that there is no possibility for the guy to give the OK until those two conditions have been met.

"Some teams have a torque sensor on the gun and they have a position sensor. If you only have the torque sensor, you can gun the nut on and it can be cross-threaded and it'll show the required torque but it won't be tight, which is what happened to both Haas cars for example and the McLaren on Friday. So some teams have got that as well as a position sensor, so if it gets to the required torque and it hasn't moved the right amount, then it says it's not done.

"So you're using two sensors in order to tell the operator that it’s actually done up. Then he presses the button, the jack drops and the car goes."