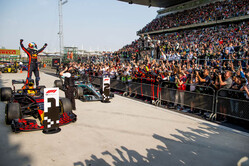 Mercedes chief strategist James Vowles has admitted that the team got it wrong in China by not pitting Lewis Hamilton for fresh rubber under the safety car.

At the time the safety car was deployed, in the wake of Pierre Gasly's clash with Toro Rosso teammate Brendon Hartley, race leader Valtteri Bottas and second-placed Sebastian Vettel had already passed the safety car line, however, running in fourth place, behind Max Verstappen and ahead of Daniel Ricciardo, Lewis Hamilton could have been pitted.

Instead, Mercedes opted to leave him out, and once back on track the Red Bull duo was able to pick its way through the leading trio with ease, picking them off one at a time.

In the latest edition of its Pure Pitwall, Vowles explains the thinking behind the move.

The situation across the race at that point was that cars weren't really overtaking," he admits. "even when there was a difference in compound between them. On stint one of the race you had a mixture of cars on soft and medium, no-one was overtaking each other.

"We had Kimi in front on the soft tyre, no difference between the two cars, we couldn't even get close," he continues, referring to Hamilton. "The same goes for Valtteri at the front with Vettel. But those were obviously on the same tyres. Verstappen was on the ultrasoft tyre, a tyre that was very sensitive and very difficult, and neither Kimi nor Lewis could make any inroads into him at all. So on a track like that the difference between compounds wasn't working out.

"Under that safety car condition we always review how many positions we can potentially gain, and how many positions we may lose. So first of all, what would we have gained? With Verstappen ahead, we knew there was a chance they would come in with the safety car, and if that were to happen, it would put Lewis back up into a podium position, if we can take that medium to the end of the race and defend against those cars behind us.

"Now, the medium on our car was working very, very well. Indeed, we knew that you could do 40 laps on it, which is what you saw at the end of the race with Valtteri, that tyre was working at the end of the race. So the first question is, is a 10-lap old medium going to suffer? The next question is, how many positions are we going to lose behind us?

"We knew Ricciardo was in our window, so if he didn't stop, we'd drop behind him. But furthermore we had Kimi, and Kimi had stayed out very, very long, and he was back into what we call the safety car window for Lewis, which meant it would be very, very marginal if Lewis was going to come out behind Kimi.

Vowles also admits that with 23 laps remaining, it wasn't anticipated that the softs would have a much pace.

"It was a decision that when we laid out all the facts on the table, we didn't believe, based on the earlier evidence, that there would be enough performance differential for a soft to overtake a medium, even one that's 10 laps old. The reality of the situation is that everyone saw what happened, both Red Bulls were extraordinarily quick on that tyre and were able to just scythe through the field, making their way up to the front."