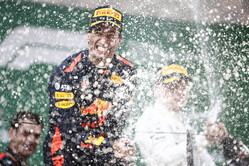 Red Bull's Daniel Ricciardo won the Chinese Grand Prix from sixth on the grid, having started on the ultrasoft tyre and making two pit stops. His second stop was made under a safety car, enabling him to re-start with new soft tyres and gain an advantage over those one-stopping on a different strategy. His Red Bull team mate Max Verstappen adopted a similar strategy, with both cars double-stacking in the pits.

Mercedes driver Valtteri Bottas in second adopted a completely different strategy, similar to his team mate Lewis Hamilton and both Ferrari drivers: starting on the soft and making just one stop to medium. Despite this wide range of tactics with many drivers using all three compounds, there was a very tight battle between the frontrunners - where managing the tyres was paramount - all the way to the finish.

Mario Isola: "After Bahrain, we enjoyed another race where some different thinking on tyre strategy among the leading competitors led to a very exciting conclusion, with many different tactics in play. Track temperatures today were around 20 degrees higher than they had been over the previous couple of days, which meant that the teams were facing a few unknown factors heading into the race, not having run in these temperatures here before. Another factor that influenced tyre strategy and ultimately the race victory was a lengthy safety car period, allowing both Red Bulls to change tyres at an advantageous moment, while reducing wear and degradation for everyone else who stayed out. In total, six drivers, including the race winner, used all three compounds."