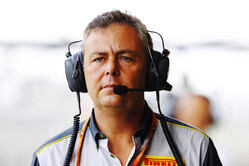 Following a request from Pirelli, the FIA has agreed to the Italian manufacturer modifying its tyres for three forthcoming events where the track has been resurfaced.

In the wake of information that came to light during pre-season testing - which incorrectly led to claims that Mercedes had made the request rather than Pirelli - whereby some teams experienced overheating issues, the tread on the tyres to be used in the Spanish, French and British Grands Prix will be 0.4mm thinner than is the norm. At the same time the tyres will be lighter (1kg per set) which will be taken into account in terms of ballast.

"We made a request to the FIA to have a slightly different tread thickness for three races," Pirelli's Mario Isola confirmed. "That's Barcelona, Silverstone and Paul Ricard.

"The reason for this request is that in general the new tarmac has a lot of grip, low wear, and low degradation," he added. "With a lot of grip, the lap time is improving a lot. We saw the lap times in Barcelona during the pre-season test was three seconds quicker than last year.

"The point is that we keep a lot of rubber on the tyre, because with low wear, the tread is there, we are not wearing the tyre. And this means we have high temperatures in the compound. So to try to reduce a little the temperature we asked for a small reduction in the tread thickness to reduce a little bit the temperature. We tested the solution already last year, and in terms of performance or other consequences, they are almost transparent.

"Obviously the reason we stayed on the standard tyre for this year was in normal circumstances you wear the tyre, and if you don't have enough thickness, you wear the tyre too quickly," he added.