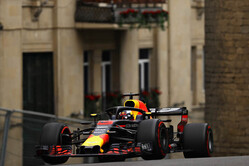 While Valtteri Bottas was quickest this morning, the headlines focussed on Max Verstappen who crashed out around 35 minutes in. Basically, the youngster made a mistake, over-compensated and then lost the rear of the car. It caused some damage at the front and cost him session time, but it wasn't a big deal.

That said, it was a big deal for his crew who have spent the break repairing the damage and getting the car ready for this session.

What was a bid deal was the poor pace of the Ferraris, Vettel finishing the morning tenth and 2.271s off the pace while teammate Kimi Raikkonen completed just 10 laps and finished 15th.

Also worth noting is that while Bottas posted his best time on ultrasofts, second-placed Ricciardo, along with Perez (3rd) and Ocon (5th) were on supersofts.

Also looking good were the Toro Rosso and Williams duos, while Renault had a mixed session, and Haas and Sauber both appeared to struggle.

Grip was an issue for most, with almost everyone suffering a lock-up at one stage or another and much use made of the circuit's numerous escape roads.

The grip issue wasn't all about the greenness and dustiness of the track, but also the difficulty in getting tyres up to their optimum temperatures, the Ferrari duo extremely vocal in this respect.

Though there is no threat of rain, the mad scramble by Sainz and Leclerc to get to work when the lights go green almost suggests otherwise. Vettel is another eager beaver.

Sainz gets things underway with a 48.433, watched on by Verstappen who waits on his crew finishing his car.

While Vettel can only manage a 58.297 having made a mistake at T2 which necessitated a neat pirouette, Leclerc goes quickest (46.703), ahead of Gasly and Sainz.

Another off for Vettel, this time at T3 as Alonso goes quickest with a 46.093.

As Leclerc retakes the top spot, most are running the supersofts, Ericsson and the Panthers among the exceptions.

As Magnussen goes quickest (45.258), it's Raikkonen's turn to head down the escape road, the Finn getting it wrong at T2.

Gasly clearly unhappy at the antics of one of the Haas drivers... we wonder which one.

Indeed, at present the Haas duo are topping the timesheets, ahead of Hartley, Leclerc and Alonso. Imagine that for a starting grid on Sunday.

In lighting succession there are moments for Raikkonen, Hartley and Bottas.

Sixteen minutes into the session, Hamilton finally heads out, leaving Verstappen as the only 'no show'.

The Briton posts 45.105 to go third, behind Ricciardo and Grosjean and ahead of Ocon and Vettel.

Lots of expletives from Stroll who is unhappy with his car, traffic and Felipe Massa, as Hamilton heads down the escape road at T8.

No sooner has Perez gone second (44.778), than he is demoted by Ocon and then Magnussen.

Raikkonen can only manage 11th (45.475) as he continues to struggle. Though he claims his tyres have cooled too much, he reckons "it's good".

Hamilton improves to second with a 44.196, the Briton on the softs compared to Ricciardo's supersofts.

Thirty-five minutes in and Verstappen is on track on supersofts. However, at the start of his first flying lap he makes a mistake in T3 and locks-up. Replay shows the Red Bull throwing up an inordinate amount of sparks.

A nice, clean lap sees Verstappen go eighth with a 44.873, his tyres showing no after-effects following his previous lock-up.

On board with Ericsson who is heading back to the pits very, very slowly.

A 43.992 sees Verstappen go second, like his teammate he is on the supers.

Moments later, Bottas retakes second with a43.570 while Vettel goes fourth with a 44.127 on the ultras.

Interesting to note that while the supersoft appears to be the 'go to' tyre, most of the teams have brought very few of them here, most opting for the ultras.

Already quickest on the supers, Ricciardo goes purple in S1 as he begins his first flying lap on the ultras. He maintains the pace in S2, finally crossing the line at 43.017, 0.553s up on Bottas on the same rubber.

Despite his limited running in FP1, Sainz goes fourth with a 43.834, snuggling in between Hamilton and Verstappen.

Almost all are now running on the ultras bar Verstappen, Alonso and Hulkenberg, though the German, whose car is in bits in its garage, doesn't look like he'll be coming out any time soon.

Another trip down the escape road for Vettel, this time it's at T15. Thus far, this isn't looking to be a very good weekend for Ferrari.

Ricciardo improves to 42.816 as Hamilton goes quickest in S1 before losing ground in S2. While the Briton fails to improve, ironically he gives a tow to Raikkonen who does, the Finn crossing the line at 42.864 to go second.

"This car is undriveable," complains Stroll. "I have so much entry snap."

No such issues for Ricciardo who improves to 42.795.

Despite delivering a typically dramatic lap, though he improves his time, Magnussen remains ninth (43.977).

"The entire field now on the ultrasoft tyres as they complete long runs that form a vital part of race simulations," confirms Pirelli. "Finding the ultimate pace isn't a priority in FP2; instead it's more a question of preparing well for the race."

As we head out of the qualifying sim phase and on longer run race pace, Leclerc is the first to try the escape road sim, opting for T1 as his corner of choice.

With just over half-an-hour remaining, and with drivers now focussing on race pace so no significant improvements expected, it's: Ricciardo, Raikkonen, Verstappen, Bottas, Hamilton, Alonso, Ocon, Sainz, Magnussen and Hulkenberg.

Vandoorne and Ericsson remain at the foot of the timesheet, the Belgian having completed just 15 laps and the Swede 9.

Hulkenberg unhappy with his brakes. "I'm pushing harder and harder, but they don't stop as well."

As if the strength of Red Bull here isn't enough, and the seeming frailty of Ferrari, the midfield battle could be ferocious, with Alonso, Force India, Haas and Renault all very much in the mix.

All are on track bar Ericsson who is understood to have a gearbox issue.

Gasly heads off down the escape road at T15, briefly bringing out they yellows. Shortly after, Perez follows suit at T3.

The longer runs also suggest that Red Bull is a real force here on softs and supers, though Mercedes is also strong.

Offs for Grosjean and Alonso, both at the infamous T15 - though most of the turns are infamous.

"As the drivers work through their long runs, we're seeing more variety in their tyre choices that give a clue as to the race strategy," says Pirelli. "Ricciardo currently on supersoft, Hamilton currently on soft (as well as Kimi. Make of that what you will."

"Honestly what is this Williams doing?" asks Vandoorne of Sirotkin.

Following an off at T3, the replay shows Perez with his right-front right off the ground. His team ask if there is any damage. He assures them that there isn't and stays out.

Travelling very slowly, Verstappen is asked to keep his engine revs down.

The session ends, and while Ricciardo tops the timesheets, that late scare for teammate Verstappen will not have gone down well.

To sum up, Ricciardo is quickest, ahead of Raikkonen, Verstappen, Bottas, Hamilton, Alonso, Ocon, Sainz, Magnussen and Hulkenberg.