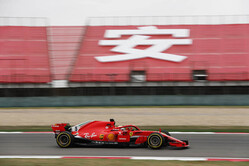 Ahead of today's sole free practice session the air temperature is 12 degrees C, while the track temperature is 14 degrees. It is positively chilly and with rain overnight the rain remains damp with much of yesterday's rubber washed away. Furthermore, there is a 30% change of rain over the next hour.

Yesterday's second session saw the Mercedes and Ferrari duos covered by just 0.108s, with Max Verstappen not far behind. With Mercedes expected to be strong here, especially in the cooler conditions, the competitiveness of the Ferrari has surprised everyone.

Of course a major factor this weekend is rubber, especially with Pirelli missing a step between the soft and ultrasoft compounds.

"The thinking behind this strategy was to have a fairly even time gap between all three compounds available," admits Mario Isola. "This has proved to be the case so far, with a gap of about 0.9 seconds between medium and soft, and a slightly smaller one between the soft and ultrasoft, leading to a total difference of around 1.6 seconds from medium to ultrasoft."

All of which should lead to some interesting strategies, with some cars seeming to be more at home on certain compounds than others.

The cool conditions yesterday combined with strong winds saw a drivers struggling for grip with even the best of them going off at some point or another.

Behind the usual suspects, the Renaults looked strong, as did Magnussen, Alonso and the Toro Rossos.

McLaren has been fined for its unsafe release of Vandoorne, while Force India has admitted that its balance issues are down to issues with the windtunnel and CFD data compared to 'reality'. Meanwhile, Williams continues to struggle.

As the lights go green, work is still ongoing on Ricciardo's car, which remains on its stand with no sign of the driver.

As Ericsson, Leclerc and Grosjean head out, the cameras cut to the paddock where Chase Carey is seen leaving a meeting with Niki Lauda, Toto Wolff and Maurizio Arrivabene, only the American is smiling.

Yesterday we saw the top three teams run split tyre strategies, clearly experimenting as they look ahead of qualifying and the race. Degradation is clearly san issue here, particularly with the ultra.

Losing time behind a slower Haas, Raikkonen is already complaining. "What's happening with these cars," he demands. The Finn subsequently posts 45.080 the first time of the day. He's on the ultras.

As more drivers head out, running a mixture of ultras and softs, Hulkenberg goes quickest (36.41), ahead of Gasly, Raikkonen, Sainz and Magnussen.

News from Red Bull is that Ricciardo has a gearbox issue but that it is nothing serious merely precautionary.

Though not as windy as yesterday it does remain blustery, drivers revealing however that the direction has changed since yesterday.

A lock-up for Sainz at the hairpin, the Spaniard subsequently running wide.

Vettel heads out, but still no sign of the Mercedes or Red Bull duos. Like his teammate, the Ferrari driver is on the ultras.

On his first flying lap Vettel posts 33.689, the German wasting no time in getting down to work. Shortly after, Alonso improves to third with a 35.364.

Hamilton and Bottas head out both on the softs.

Vandoorne is told to pit as his team has lost telemetry.

Gasly continues to complain about the change of wind direction... as if his team can fix it.

Bottas goes third with a 35.232 while Hamilton posts 40.125, a conservative start for the Briton.

Bottas subsequently improves to 34.728, thereby splitting the Ferraris, while Hamilton appears to be struggling, especially in T14. Nonetheless, the world champion improves to fourth with a 34.807, albeit 1.118s off Vettel's pace.

Replay shows a lock-up for Hamilton in T9 as Grosjean spins in T10.

Verstappen is on track on softs, as is teammate Ricciardo.

Another spin for Hamilton, this time as he exits T10. It's a big spin which leaves him facing in the wrong direction. Replay shows him running wide in T9 over the damp Astroturf which sets the subsequent spin in motion.

Grosjean is told to pit but also advised to proceed with caution as his rear brakes are particularly hot. He arrives back at his box with smoke billowing from the offending brake drums and a few licks of flame... fire extinguishers are on hand.

Hamilton's car is being checked over following his spin.

As he climbs from his car, the VSC is deployed.

Perez is warned of potential oil on the track following Ricciardo's failure.

Ricciardo oversees the clumsy rescue of his stricken car, he needs it back in the pit as soon as possible in order that his crew can change the engine in time for qualifying.

Coming a week after the disaster that was Bahrain, this latest incident appears to push Red Bull further towards Honda.

His team feeling that it's getting nowhere with these tyres under the VSC, Verstappen is told to pit.

38 minutes into the session, all but Vandoorne have posted a time. The Belgian has in fact posted a time but it is 35s off the pace and therefore not exactly representative.

As the VSC is withdrawn, leaving 19:29 remaining, Stroll warns of rain on the back straight.

Vettel wastes no time in getting back to work, the German immediately going quickest in S1. Despite a poor middle sector he stops the clock at 33.018, he and his Ferrari teammate having posted the quickest times of the weekend thus far.

Hamilton is back out, now also on the purple-banded rubber. He's advised that his biggest loss to Vettel and Bottas is in S3.

In the Red Bull garage, Ricciardo watched the screens as his teammate begins his first flying lap on the ultras. S1 sees a PB from the youngster, maintaining the pace in S2. At the line it's 33.969 which sees him go fourth splitting the Mercedes pair.

His speed through the speed-trap is 195 which compares to 208 of the Ferrari.

As Verstappen admits frustration with his car, claiming he's experiencing the same issues he had in Baku, Bottas is back out on track on softs.

"The engine, I don't know what the **** is going on there," moans Verstappen.

Admitting to making a mistake, Hartley adds that the ultras don't last for a second lap. "You have to do it lap one," he warns.